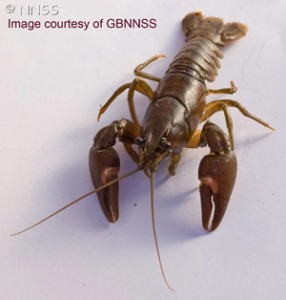 Plants and animals from different parts of the world are being ‘mixed’ up as worldwide travel by train, boat and plane increases year by year.  The woodlands' blog has reported on a number of plants and animals that are regarded as ‘aliens’ or invasive species, for example, the 'killer shrimp'.  Sometimes the ‘concern’ proves to be unfounded, but the arrival of various pathogens can be problematical for 'native species'.

At some point back in the 1970’s, the North American signal crayfish arrived in the U.K.   Since that time it has spread through various river systems, particularly in South and South East England, at the rate of 2 km per year (approx.).   Its spread may have been assisted by damp fishing gear.  It would seem that the signal crayfish is out-competing the native white clawed crayfish (that is, native to Europe, including England, Wales and Ireland – but not Scotland).

039;porcelain disease', in which the parasite affects the legs and movement of the animal.  Dr Alison Dunn of the University of Leeds has been working on how host-parasite interactions can affect the outcome of ‘invasions’.

Haha, trust Monbiot to eat them!

This is worth a look
http://www.guardian.co.uk/environment/georgemonbiot/gallery/2009/sep/30/george-monbiot-crayfish#/?picture=353517522&index=7