Winter survival in wrens ~ by Lewis 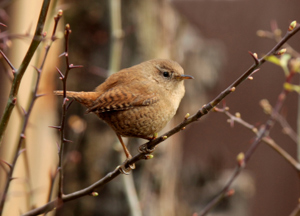 The wren is a small, brown bird; it has an almost rounded outline.   It is a somewhat 'dumpy bird', with a fine bill and relatively long legs,  and short, 'round' wings. Its tail is short and often held high - (though not in the picture here!).   Like many small birds and mammals - it suffers in very cold winters. Researchers at the University of East Anglia have found evidence that wren populations may be adapted to local climates.  Using data from the Breeding Bird Survey (run by the BTO, RSPB and JNCC), they found that wren populations were susceptible to harsh winter weather (as measured by the number of days with ground frost) BUT that northern (Scottish) populations were more resilient to harsh winters, even though these birds sometimes experienced 70% more frost days than their southern counterparts.   Information collected by bird ringers indicated that the body weight of the wrens in the warmest area (the south west) was 5% lower than those in coldest area (East Scotland). 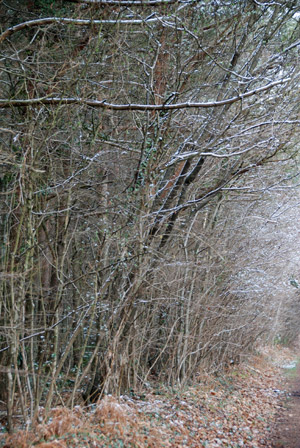 Bergmann’s rule suggests that there may be a correlation between body form / mass and latitude. Thus, human populations who live near the poles, such the Inuit, Aleut, and Sami people, are on average heavier than populations from mid-latitudes further South.

Dr. Catriona Morrison, the research worker at the University of East Anglia, speaking about the wren study is quoted as saying “Large individuals are likely to be favoured in colder regions due to the thermal advantage of larger size and their ability to store more body fat. Our findings match the pattern seen more widely across other species – a pattern known as Bergmann’s rule.”  Birds or mammals that live in warmer areas may have the opposite problem; body heat generated by metabolism needs to be lost quickly rather than stored within.   These findings may be relevant in explaining how bird species cope with climate change.

However, Bergmann’s rule is not universally accepted.  According to Professor Valerius Geist the association / correlation with temperature is spurious.  Geist suggests that body size is proportional to the duration of the annual productivity ‘pulse’, that is to say food availability to each animal during the growing season.  The availability of resources is a major constraint on the survival and breeding success of many organisms. Scarcity of food, breeding sites etc can restrict the number of organisms in a given area and over time can also result in organisms adapting by becoming smaller.

There has been a wren in our conservatory for some weeks now. The conservatory is kept above freezing as it is where our tortoise is hibernating. I worry that it does not have sufficient food – should I leave something out for it? This is not the first time this has happened but previously I thought they were trapped and left windows open. This one does not seem to want to go out and it is very frosty outside.

I believe that wrens are well known for clustering together to survive the cold nights- e.g. large numbers will be found together in a nesting box or similar to preserve/share warmth overnight- although this would obviously not negate Bergmann’s rule, it would aid survival provided there was also sufficient food around.