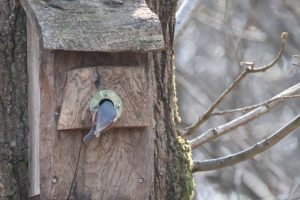 Nuthatches are one of our real favourites. We’ve had them nesting in a box in our walnut tree at home for several years. They are colourful, noisy and bold birds, full of character, with a bit of a mean streak. They will keep the sparrows and tits under control at a feeder, and even a mated pair don’t tolerate each other too well where food is concerned.

They are able to climb headfirst down a tree, a feat not managed even by the Treecreeper. This agility is evident from an early age. We’ve had the privilege of watching young grow with a nest box camera, and they climb around inside of the box well before their feathers are fully developed. When the young leave the nest they don’t fly immediately, but climb into the upper canopy rather like young Tawny Owls.

Martins and Swallows are often considered to be the potters of the bird world, but Nuthatches also like to mould with mud. They can build elaborate structures at the nest entrance, quickly transforming a hole into a deep tunnel to discourage intruders. Even in winter we’ve seen them continue to add to their construction, filling in gaps and plastering under overhangs. 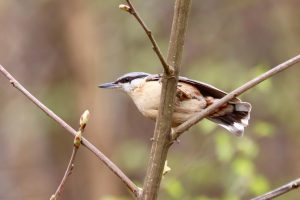 Woodcock wood - at the feeder

Although their diet is primarily insects found in the bark of trees, they are partial to seeds (and broken walnuts) and build food caches in times of plenty. The fierce defence of territory and food cache are one of the same. If you provide a constant supply of sunflower seed, they willingly spend hours in a day back and forth to the feeder. The food caches of our Nuthatches must be enormous affairs, much to the benefit of the RSPB shop!

Last autumn we put up two Nuthatch boxes in Woodcock Wood. Needless to say the local Woodpeckers were quick to destroy the entrances, and we so we fitted metal plates with a 32mm hole.

In early spring a pair of Nuthatches were showing interest. They finally selected a box and began the mud construction. Nesting is now in full swing. Last year in our box at home, six eggs were laid by mid May, and the young fledged in mid-June. Without the privilege of an in-house video in the Woodcock Wood box we cannot keep an eye on progress, but at the time of writing the male is busy back and forth with grubs and insects. 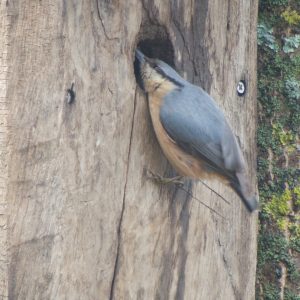