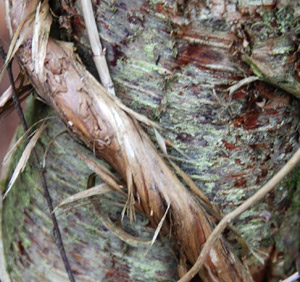 Plants climb in a number of ways.  Some wrap themselves around other plants, others are ‘sticky’, and some curl.    Some, like honeysuckle, use their stems, whilst others make use of their leaves to wrap around other plants or nearby supports. Twining stems twist around whatever they touch, be it a branch or an artificial structure.  Depending on the species of plant, the stems will wind clockwise or counterclockwise around the support.  Some wrap themselves around the supports so strongly that they risk damage to the supporting plant / structure.  Honeysuckle has thin, green and pliant stems when young but can form very thick, woody, rope-like stems (see featured image) as it matures.  Bindweed or Convolvolus has a thin, green stems which grow surprisingly fast around almost anything that they touch.

Plants with twining leaves, use them like tendrils - for example, travellers joy or old man’s beard (Clematis vitalba).  Whilst old man's beards is regarded as a 'normal' plant of the hedgerow here, 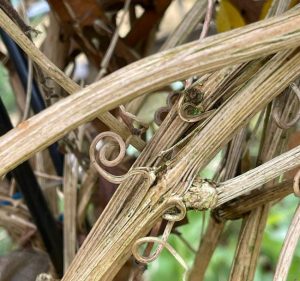 it is viewed with some alarm in places like New Zealand.  It was introduced there as a garden plant, but its wind-blown seeds soon found homes in their woods and forests.  There it has grown rampantly in the woodland canopies reducing the light that passes down to the shrub and herb layers.  The weight of this climber may break the supporting trees.  Clematis leaves are compound structures with three to five leaflets. Charles Darwin, who was interested in climbing plants, described Clematis as a leaf climber.  It uses the stalks of the leaves or the leaflets to climb. He noted that contact with another structure was enough for the leaf stalk / petiole to start bending around it. (see image)

This ability to respond to touch is termed thigmotropism.  It is a growth response, like phototropism - when plants grow towards a light source.  The growth rate on the side of the stem that touches the 'support' is slower than on the side opposite the point of touch.  As a result the stem begins to curl around the support. 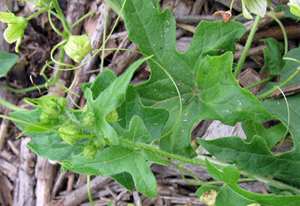 The same response is seen in plants that climb using tendrils.   White Bryony is a good example of a plant that uses tendrils to climb. Tendrils are thin, wiry structures along the plant's stem that ‘reach out’ into the space around a plant until they come into contact with something they can grab.  Once contact is made, the tendril curls, forming a coil.  Experiments with the tendrils of Bryonia dioica, have suggested that calcium ions are involved in this response;  as is the hormone, auxin. In consequence, there is a change in the amount of water in certain cells (turgor pressure changes).

Summarising, there are two kinds of tendrils:

Some plants employ two ‘techniques’, for example, the Virginia creeper (P. quinquefolia) has stem tendrils with touch-sensitive ‘sticky’ pads that allow them to attach to almost any surface. 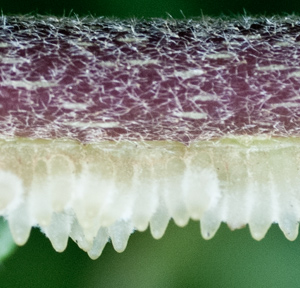 Some climbers, ike Ivy (Hedera), make use of small ‘stem roots’ to attach themselves.  Again, it was Darwin who noted that Ivy sends out adventitious roots from its stem in order to climb. Adventitious roots are roots that form in someplace other there where you might expect them.  Using these ‘simple structures” (and the 'glue' they exude), Ivy can grow up trees and supporting structures to heights of 30 metres or more.  Removing ivy from a building should be undertaken with care so that the underlying surface doesn’t suffer too much damage.

Lastly, there are the climbing plants that might be described as scramblers or indeed ramblers.  These plants tend to have long, flexible stems, but they are unable to climb on their own. Scramblers may have thorns or ‘hooks’ that help gain some purchase on surrounding plants.  Some woody members of the the Rose family (Rosaceae) fall into this category, eg. climbing and rambling roses plus the fruit-bearing blackberries (brambles).  Herbaceous scramblers would include plants like cleavers..  Stems of cleavers spread and sprawl across the ground or up and over other plants. Cleavers is common in hedges, arable fields and gardens. The stems and leaves have many, minute hooks or barbs which help the plant to scramble over others. 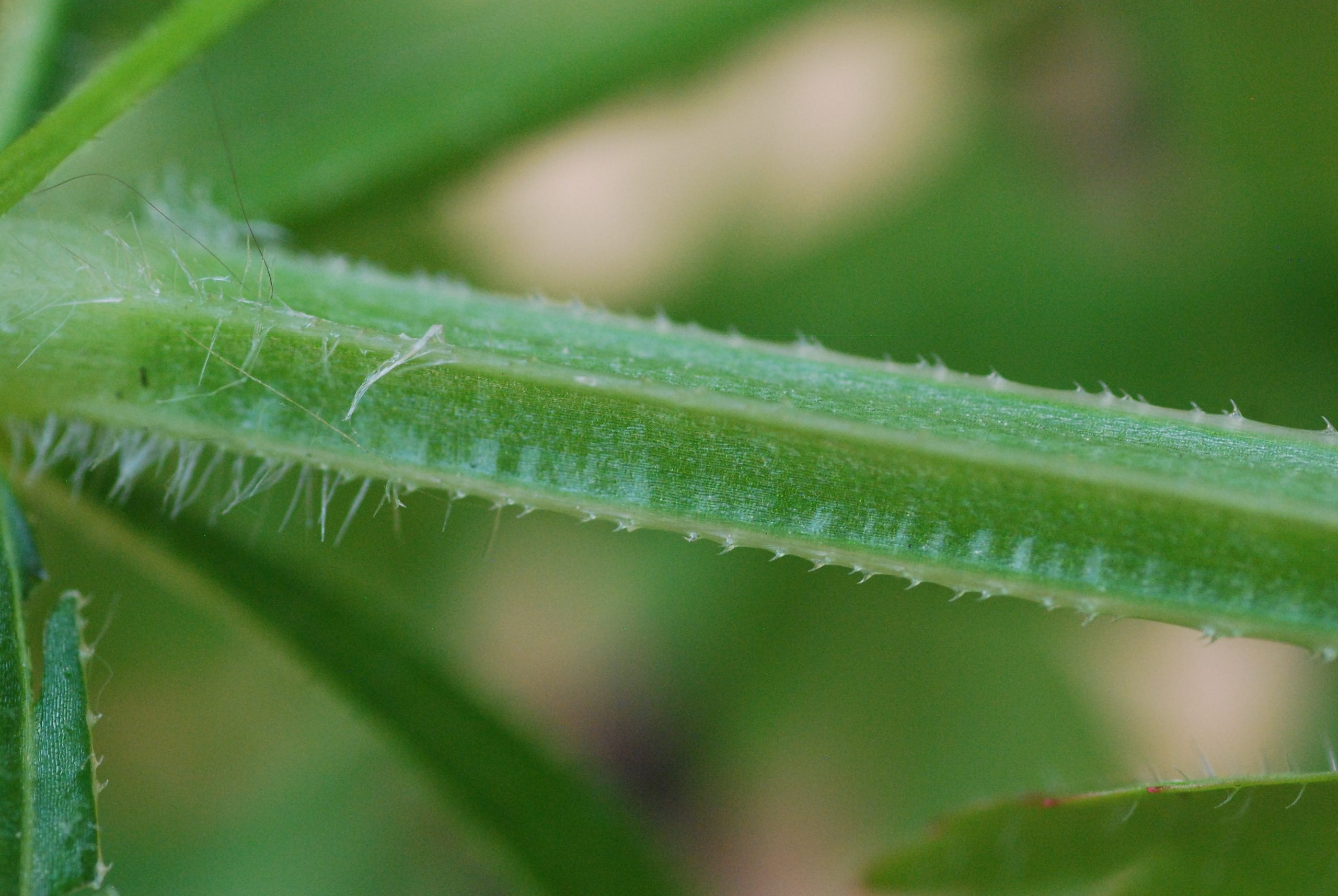 Stem of Cleavers with small 'hooks' - for scrambling 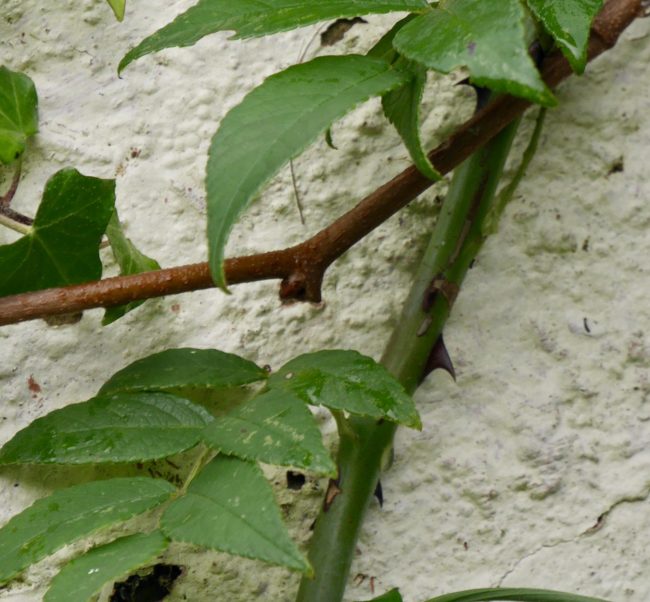 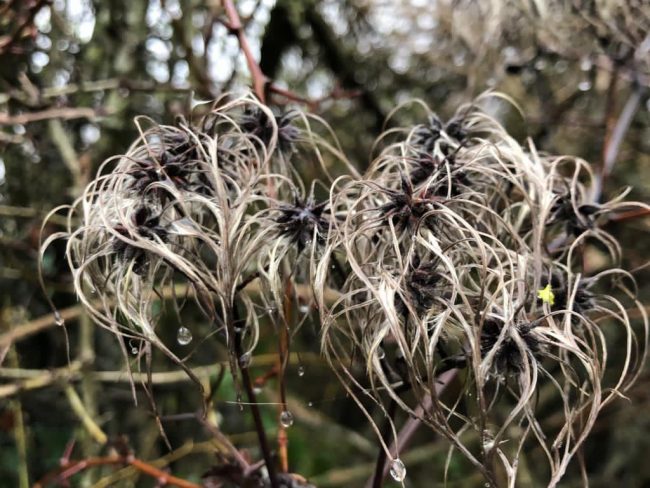 old man beard or traveller's joy - produces many seeds which are dispersed by the wind. 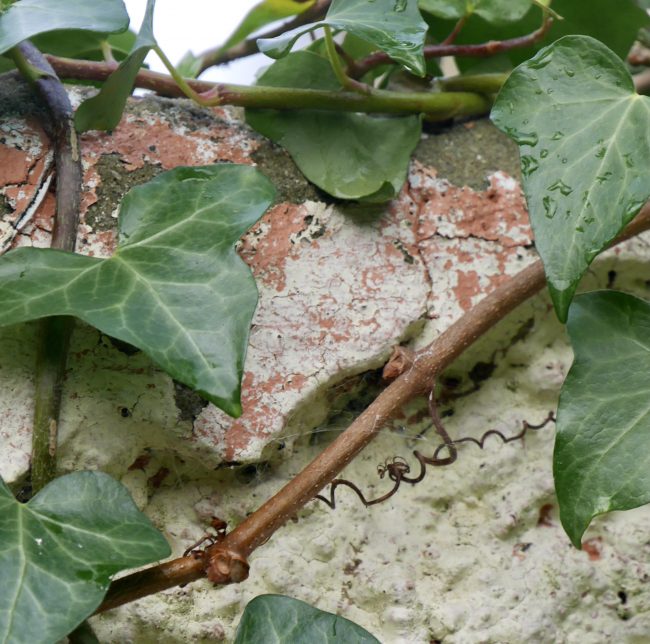 Ivy and Virginia Creeper on wall 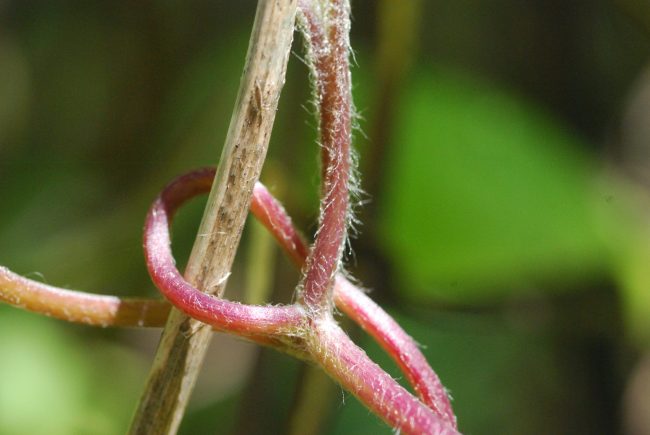