....or 'traveller's joy' to use another of its many names, is a vigorous climber.  As it grows and matures, it forms woody stems as thick as a wrist, and the plant may grow to a height of 40 feet or more. Like other members of the Clematis genus, it climbs using its leaf stalks (petioles).  These entwine around any convenient support or structure in their vicinity and then lignify (become woody).

In the UK and many parts of Europe, it may be seen in a variety of habitats such the edges of woodlands, hedges, or within woods where a gap in the canopy has formed; though it does tend to like chalky soils. Clematis belongs to the same family as buttercups, the Ranunculaceae.  Clematis sp. are the only woody members of the Ranunculaceae.   The flower structure is also unusual in that the flowers of Clematis species actually have no petals!  The showy, petal-like structures (for which garden species are most valued) are, in fact, sepals. 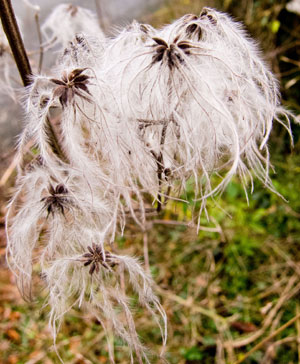 Old man's beard produces many flowers (see featured image), which are a soft white colour.  Each is about 2cm (¾ inch) across.   W J Bean (Trees and Shrubs Hardy in the British Isles) says that the flowers have a slight almond scent.   When the plant has finished flowering, the developing seeds (known as achenes) retain part of the flower called the style.  This has long, silky hairs, which form the grey tufted balls that are so conspicuous in hedgerows in autumn and winter.  These silky hairs assist in the dispersal of the seeds.These are indeed the 'old man's beard' ( see adjacent image).

The French name for old man's beard is 'herbe aux gueux' – the beggar's or rascal's herb.   Beggars were said to use its acrid sap to irritate the skin to give it a sore and ulcerated look in order to induce sympathy in, and a donation from, passers by!

Whilst we consider old man's beard to be 'normal' plant of the hedgerow, it is viewed with some alarm in places like New Zealand.  It was introduced there as a garden plant, but its wind blown seeds soon found other homes - in their woods and forests.  Here, it grows rampantly in the canopy reducing the light that filters down to the shrub and herb layers.  Consequently, the growth of these plants is reduced; indeed, the sheer weight of the plant may break the supporting trees.  As with invasive species here, it has to be controlled.

I’ve keen bern making Christmas wreaths with a friend . She had collected ivy and Holly and old mans beard . I have not stopped sneezing all night . I felt it was an allergic reaction. The culprit being the old mans beard . I’ve not experienced anything from Holly or ivy before. So think my presumption is correct . I’ve tried googling it, but found nothing . So thought I would post on here to see if anyone had heard of this . It is definitely not a cold or anything .
Any comments would be gratefully received. Thank you .

> Within a short time I suspect the native species will loose the fight.

Travellers Joy does require control to an extent, however, it is a UK native plant & a valuable foodplant for many struggling insects,the vast majority of which have seen their numbers plummet with the loss of their food plants & a sensible approach is required, with this and all our native plants.

This plant does seem to need control. Having just returned from a walk along the Royal Military Canal at Hythe it is apparent that Old Mans Beard is slowly destroying the native species. 70% of the traditional hedgerow trees and shrubs are under attack and many have died to a combination of this plant Ivy and Convolvulus.

Within a short time I suspect the native species will loose the fight.

Come to the Cotswolds now to see Old Man’s Beard in abundance along the roadside hedgerows.

I often saw Old Man’s Beard when I lived in Devon as a child. However, now living in the English Midlands, it is years since I have seen any.

Reading “A Dictionary Of The Sussex Dialect”, the entry p123 for “Tom-bacca” mentions this plant saying ” also called boys’-bacca, because the boys cut the small wood in pieces to smoke like cigars”

[…] The pasqueflower is not a woodland plant, but more one of open grassland (on chalk or limestone), sometimes growing with upright brome and tor grass  However, it is a particularly beautiful and rare flower – having deep purple petals, that surround the many vibrant yellow stamens.  The flowers usually appear in mid-April when the daytime temperatures have risen into double figures; it is often associated with Easter, and is,  otherwise known as easter flower, meadow anemone or dane’s blood.   The flowering period of the pasqueflower is quite long, lasting for some 4 – 6 weeks.  The pasqueflower is a member of the 'buttercup' family – the Ranunculaceae, like the wood anemone and traveller's joy […]

Dear Sirs/Madams
Are there any biological controls that are usued to control ‘Old Man’s Beard’ which check the spread.

This plant does pose problems when it colonises wild native hedges. I have many hedges that I maintain throughout the eastern counties that are suffering from the ‘swamping’ effects of this plant. Yes it can be controlled if found early on and removed, but once well established, it can completely swamp a hedge or sections thereof. I have seen bits of hedge that have suffered for many years, and when this plant has been cut away the underlying hedge has died back or is in a very weak state. I don’t think you can truly have both a wild native hedge -and- Clematis vitalba, – it’s one or other, the latter will spread and dominate if left to it’s own devices.

Today, we have been walking along the Lea Valley River, near Stanstead Abbotts and we came upon old man’s beard…discussion developed as I (the New Zealander) said “that is old mans beard and a weed”. Agreeing it was a Clematis, we were unsure of our facts until reading your helpful information.
Thank you

I came across this variety on a trip to Constable Burton Hall Gardens near Leyburn in North Yorkshire recently and was astounded. I never realised it could flourish to the extent I saw and decided to do some further research. Thankyou for your input.

[…] scent of Box leaves becoming more apparent. Aside from Box, the vegetation here includes Yew and Old Man’s Beard with its distinctive fluffy seed heads that give it its common name. Together with an abundance of […]

Clematis can destroy trees in the U.K. as well. We had one hazel coppice coupe of just over 1 acre that was apprx. 1/5th clematis. It had killed a field maple and completely covered a crab apple. We were pulling yards of the stem out of the ground at a time, cutting into manageable sections and burning it. It is still there, but we hope if the coupe is cut every 7 years, we will be able to keep in under control.

It is used by wildlife, so let a little survive (we havn’t managed to kill it yet) but keep it under control.

My experience in the UK is that it’s fairly easy to control, growing from one stem which can easily be cut. Like guelder rose (Viburnum opulus) and whitebeam (Sorbus aria) it grows mainly on chalk and limestone so is an indicator of calcarious (alkaline)soils. The other climber honeysuckle (Lonicera periclymenum)often found on acid or poor soils can also stunt tree growth but if possible should be tolerated to an extent as it is a valuable wildlife plant. Some Clematis can be tolerated as the seeds are eaten by many birds and the scented flowers are a good nectar source for night-flying moths, as well as day-flying hoverflies and bees. (sorry can’t underline or italicise the scientic names)