Swift-bricks: fancy sex in a swift box or in flight? 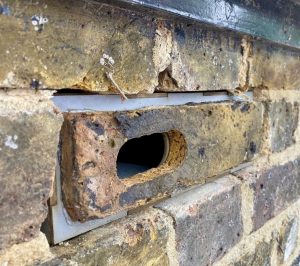 Swifts are amazing creatures - they migrate from Europe to Africa and back every winter, they cruise at 70mph and in a lifetime they might fly a distance equivalent to three return trips to the moon.  There is some question about where swifts actually mate - it is certain that they can copulate in mid-air, but they also routinely mate at their nest sites.  Possibly mating on the wing is a lightening quick liaison between individuals that are paired with someone else - a case of a 'swift quickie', that may have the effect of widening the gene pool - even if it's a long shot.  Despite all their aerial stunts, they spend about a month every year incubating eggs or brooding chicks on a solid surface such as a ledge or crevice, an old nest or a specifically designed swift box or swift brick. 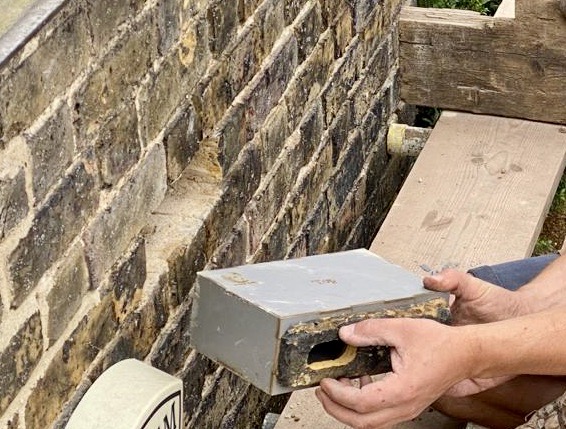 But swifts are under threat, officially classified as "Endangered", with numbers reducing. The U.K. now has well under 100,000 pairs of swifts and the population has halved over the last 20 years or so.  There are many different species but most swifts have the characteristic outline of a short forked tail with very long swept-back crescent-shaped wings.

Apart the need for farmers to pursue more sympathetic methods for the sake of birds, swifts also need good breeding spaces and the RSPB has been encouraging people to make their own swift boxes to go under the eaves of houses and outbuildings. 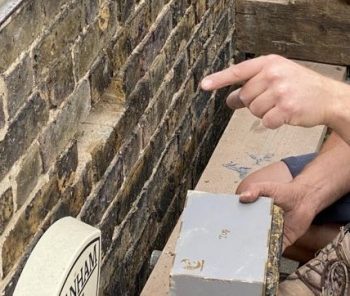 Although swifts live most of their lives in the air they need somewhere to bring up their young and they prefer nestboxes to be high up - ideally over 4 metres above the ground.  One way to put in nesting spots for pairs of swifts is to install integral "swift-bricks" - nest boxes embedded in the wall which are then scarcely noticeable from the outside.  Some manufacturers make these the depth of a brick, only 100mm deep, but this doesn't really give the swift enough space to turn around so when we put in our seven swift boxes last week, we used deeper boxes which go back about 150mm.  You can get swift-bricks from some of the large brick manufacturers such as Ibstock and Hanson but it's perhaps better to find a smaller supplier - we found Dick Newell in Cambridge - he runs a cottage industry supplying boxes for a cottage-loving bird.   Speaking to him, we wondered how we would clean out the nests from the swift-bricks but apparently that's not necessary: swifts are very fastidious and tidy birds.  Dick, who is a real swift expert, advised us to place our swift boxes in a spot that's sheltered from rain and sun and where the swifts have a clear flyway.  Apparently we can increase our chance of getting swifts to nest in the boxes with swift-like attraction calls, which we might do if they don't find their own way to the lavish quarters we've created.  Dick's website is actionforswifts.com and you can phone him on 01223 860400. 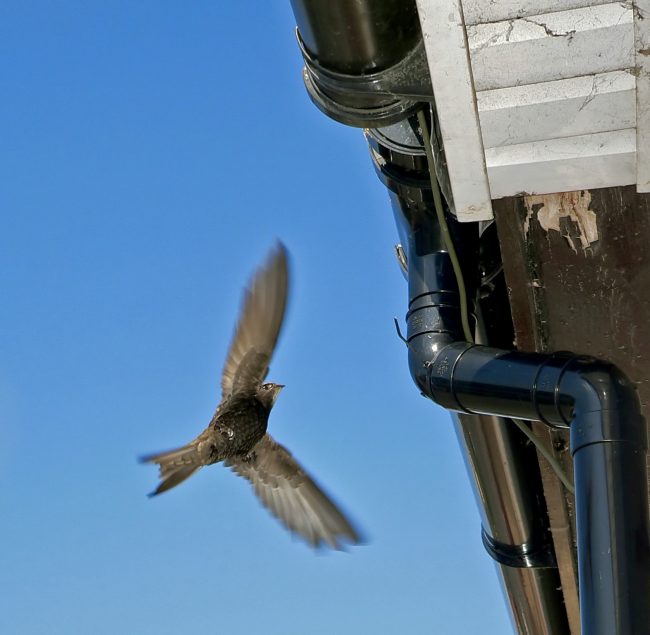 Identifying swifts isn't always easy because they look a bit like swallows despite not being related; they are in fact more closely related to hummingbirds.  They have evolved in similar ways, perhaps because they both mainly eat insects caught on the wing.  If someone points to birds perched on a telephone wire and asks whether they are swifts the answer is "no - swifts never perch on wires".  Some swift species such as the white-throated needletail are occasional visitors to the UK but they mainly flourish further east, across Asia, where in the winter they migrate south to Australia or India - these are perhaps the fastest swifts of all cruising at more than 100 miles per hour.  Like other swifts, they nest in rock crevices or hollow trees. We are hoping to film "our" swifts if they arrive next spring - but we don't plan to put cameras inside the nesting boxes.  Just because their acrobatics make great films it doesn't follow that they want to be monitored in their living rooms and nest-rooms!

good¬ I really liked your comment about not putting cameras in living rooms. and one day I am going to write about humans’ assumed right of exploitation of animals, birds and insects by tagging, marking, capturing or killing them in the “interests of science”, or “so that we can help them” – but really to satisfy our curiosity or to further our academic careers.