You are here: Home > Blog > Flora & Fauna > The Ghost of Workers Past Pt 6, Vegetation : Delving into the history hidden in your woodland

The Ghost of Workers Past Pt 6, Vegetation : Delving into the history hidden in your woodland ~ by David Brown

In all the talk of ground archaeology I haven’t made any mention of the trees and the ground flora. They provide important clues to past use and help to improve the picture you build up of the wood’s history.

The way the trees have been managed, as well as the constituents of the ground flora, can give you clues. The geology largely determines what grows best and although in the past the knowledge of the underlying geology was not as advanced as it is today, woodsmen knew what species would grow well in their local woodlands. In addition their tree management skills had been handed down from father to son and were in their blood.

Once a maiden has been cut and shoots have begun to develop from the stump, all future coppicing has a tendency to develop from the outside of the stems and the original stump in the centre rots away. This can leave you with a ring of living stems. This isn’t always what happens, but you will find numerous examples where it has. A question I am often asked is the age of stools and it’s rarely possible to say with any degree of accuracy. It would be great if you could because then learning about the wood’s history would be so much easier. Unfortunately there are too many variables: the nutrients underground, the aspect of the slope, the degree of drainage, the geology, the local climate, the effects of browsing (by deer, for example), the time of year the coppicing is done and, of course, the species of tree. It takes a lot of experience to begin to even come close, so I’m afraid I won’t be able to be very helpful on this.

But it can help in making a guess about the age of a coppice stool to know what the species may have been used for in the past. You can get a very good idea of what species was used for what craft by looking in Woodland Crafts in Britain by H L Edlin. It was first published in 1949 by Batsford (but there have been more recent reprints) and manages to capture well the last days of many woodland crafts. Edlin describes the tools used and which species was used for what, it’s very well illustrated and I use it frequently. Needless to say, the book is only available second hand and is now quite pricey.

My experience on the Weald of Sussex and Kent is that the start of a local industry (such as brickmaking and iron production) can be very influential in changing the species being coppiced. If you know what local industries have come and gone and roughly when, you can begin to put an approximate date on the age of stools and even guess what might have been growing there before the one you’re looking at. You will also get clues from looking at what trees are in the boundary bank of the wood.

The owner of the wood generally sold the coppice standing in cants (an arbitrary measure of area) to woodworkers who would then cut it and either sell the wood or keep it for their own use.  A coppice stool cut a few feet above the ground, a sort of low pollard, frequently marked the boundaries of cants. 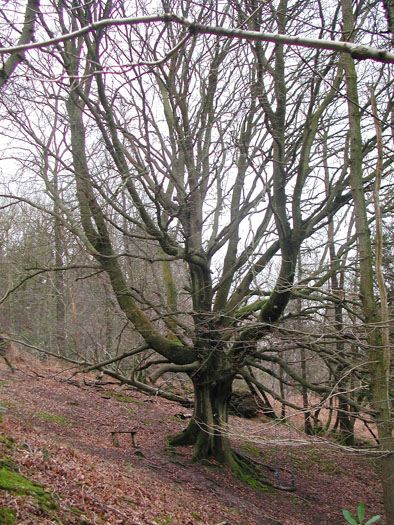 Coppicing and grazing animals do not mix. In general, you excluded animals from coppiced woods and did your best to protect the growing shoots from deer and rabbits as well. In wood pastures, trees were pollarded to prevent grazing of young shoots. Oak pollards were quite common, but pollarded beech can be found as well. If you have one or two old pollards in your wood, it may be a sign that the wood was used as pasture.

Old trees were often used as markers, and a veteran beech or oak can often be found beside old trackways or on woodbanks. Their significance varies depending on their position; working out the significance of a veteran tree can lead to many happy hours of discussion and argument.

If you are at all botanically inclined, the ground flora will reveal much more about the history of the wood than almost anything else. Don’t fall into the trap of thinking that because you have found one or two ancient woodland indicator species, you have an ancient woodland: you need a wider picture than that. A proper analysis of the flora using quadrats (measured and marked areas) and the NVC (National Vegetation Classification) will give you a truer picture of what sort of woodland you have and how it fits into the local pattern of woods.

The vegetation in a wood is probably the reason you are interested in woodland and you may feel I haven’t done it justice here. But I’m quite certain that your enthusiasm means you will be self-motivated to pursue the subject further without any prompting from me.

If you’ve enjoyed David Brown’s series on Woodland Archaeology as much as we have, you may like to read further.

Here is a short book list prepared by David (there is a more detailed version on the SWOG site):

Woodland Archaeology in the North Wessex Downs AONB. A downloadable document from www.northwessexdowns.org.uk

Morris, John. The Cultural Heritage of Chiltern Woods. Published by John Morris at the Chiltern Woodlands Project 2009.  Can be ordered from www.chilternsaonb.org/caring/woodlands_project.html

Bannister N. The Cultural Heritage of Woodlands in the South East. 2007.

Books which include elements of woodland archaeology:

Muir, Richard. The New Reading the Landscape, University of Exeter, 2000.