The Woodlands Blog has previously reported on the threats facing the Horse Chestnut tree in the UK,  specifically: 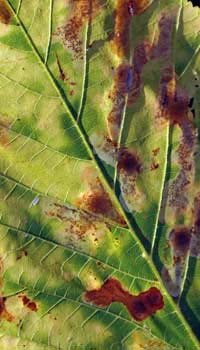 The moth Cameraria ohridella or the Horse chestnut leaf miner that lays its eggs in the leaves.   The larvae that hatch from these eggs eat and tunnel their ways through the tissues of the leaves.  In consequence, the leaves turn brown in early summer and may be shed from the tree.

Leaf Blotch fungus, Guignardia aesculi; this attacks the leaves so that reddish or brown blotches with yellow borders develop.  The blotches may, at a distance, look similar to the damage done by leaf miner.

However, the most damaging condition seems to be bleeding canker.  The number of reports of bleeding canker on horse chestnut has significantly increased in recent years.  The cause of the disease has now been established.  It had been thought that the condition was due to a fungus-like organism Phytophthora, different species of Phytophthora are known to be responsible for a number of plant diseases, such as sudden oak death.

However, DNA analysis of damaged and diseased tissue has established the presence of a bacterium Pseudomonas syringae pathovar aesculi. The same bacterium is known to infect the Indian Horse Chestnut (Aesculus indica); it is possible that the bacterium was introduced on imported trees.  The Netherlands and Germany also have Horse Chestnuts with bleeding canker, and have also demonstrated the presence of Pseudomonas in infected trees. The working group Aesculaap has produced some advice on the handling / treatment of diseased horse chestnut tree, which can be accessed from their home page

They have been reports in the press of a new treatment for horse chestnuts with bleeding canker.  The treatment involves infusing the tree with allicin.  Allicin is derived from garlic (Allium sativum) and has anti-bacterial and anti-fungal properties.  The treatment is presently offered by a Yorkshire based company JCA , working in conjunction with Allicin Tree Care, which is based in the Netherlands.

I notice a lot of Horse chestnuts (August 2011) are being attached from the BOTTOM My trees are very old and are being attacked from the TOP. If an insecticide could be found that killed the moth could it not be sprayed on the ground in the Autumn/Winter so any over-wintering of the moth could be killed off. I care about my trees so I would do it which might help some way towards the overall picture if others who care did it too.

The annual removal of leaves after they have fallen has had no effect in reducing leaf miner attack on two trees outside our flat. It’s now late August and the leaves on both trees are more than 70% brown. What is interesting is that a few trees in our neighbourhood of south-west London have very little moth infestation whereas trees nearby do.

See comment above – removal of old / dead (fallen) leaves which have over wintering pupae seems to be one of the few things that one can do, but do have a read of the Forestry Commission pages for their professional advice / observations.

I have four majestic horse chestnut trees. All 4 with the moth and one with moth and bleeding canker. Has anyone found a horse chestnut that has’nt got the moth? I do not believe there are any. How can a moth travel so viriliantly all over the country, it is unreal. It is very upsetting. I am in Leicestershire. What can we do to stop it, if anything?

See also
http://www.woodlands.co.uk/blog/practical-guides/horse-chestnut-woes-dealing-with-disease/
The Forestry Commission offers a number of suggestions about managing the leaf miner problem, mainly through the disposal and composting of infected leaves. If leaves are removed then so are the over-wintering moth pupae, which would otherwise form the first generation of moths to attack the tree in the spring. see for example http://www.forestresearch.gov.uk/website/forestresearch.nsf/ByUnique/INFD-6Q3DPF.
(I wonder if another ‘hard winter’ would also reduce the moth numbers ??)

The Commission continues to monitor the spread of this moth, and is keen to receive information and records of infected trees in areas not included on the 2006 map. Further information on the horse chestnut leaf miner can be found in the Exotic Pest Alert – http://www.forestry.gov.uk/fr/INFD-5ZABPX and
http://www.forestry.gov.uk/pdf/Horsechestnut.pdf/$FILE/Horsechestnut.pdf

I am wondering if it is possible to save these trees? It is so sad to see this disease on such majestic trees, would like to know very much. thank you.

Qute an alarming disease, seems to spread upwards from the lower leaves.During a visit to Clumber Park (august 1st. ) all the majestic horse chestnuts but none of the sweet chestnuts seem to be affected. 02/082010