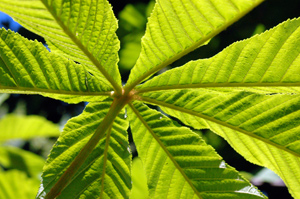 The woodlands blog has reported on the problems facing the horse chestnut. Whilst not particularly a woodland tree in the U.K., horse chestnut trees were often planted by local authorities, in part because of their impressive appearance, particularly when in flower but also because of their low incidence of fungal disease and pests. However, it now seems that councils are having to remove many of these trees in order to protect people at risk of diseased branches (when they fall). For example, an avenue of horse chestnut trees planted in the 1930s at Avebury, Wiltshire, has had to be felled after becoming diseased.  The National Trust reported the trees had 'bleeding canker'.  Planting of horse chestnut trees has declined as the young trees quickly succumb to the activities of the leaf miner moth, the leaf blotch fungus and / or bleeding canker.

The fungus that attacks the tree is called Guignardia aesculi or the leaf blotch fungus. Reddish brown patches appear on the leaves (from July onwards), particularly at the tips and edges of the leaflets. A closer look will often reveal small black "pimples", which are the fruiting bodies of the fungus. Infection may result in some of the leaves falling early, but it does not usually result in significant damage to the tree. 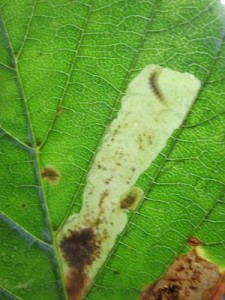 Infectionof the horse chestnut with the caterpillars (larvae) of the small moth (Cameraria ohridella) has a much greater impact. The leaves are essentially eaten from the inside.  The caterpillars feed on the tissue between the upper and lower surfaces of the leaf, producing˜mines"  There are tunnels through the leaf where the tissue has been eaten. If the leaf is held up to the light, these tunnels (if new) may appear translucent. The loss of the green, photosynthetic tissue eventually results in the senescence / death of the leaf and early leaf fall.

The moth caterpillars pass through several feeding stages (instars) when the skin is shed and growth occurs. After about 4 weeks (in the summer), they pupate and emerge some 2 weeks later as the adult moth. The cycle of egg laying and hatching to caterpillar etc. begins again. Many types of tree are infected by leaf miners, but they do not (usually) have dramatic effects. However, the horse chestnut often suffers severe infestations with these moth caterpillars so that the leaves fall prematurely.  The tree is basically defoliated and the conkers are reduced in size. 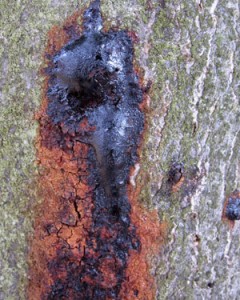 Though bleeding canker has been observed on trees in the U.K for many years, it is believed that most of the new cases are caused by the bacterium, Pseudomonas syringae pathovar aesculi, which previously was known to infect Indian horse chestnut trees. First symptoms tend to be limited to bleeding lesions of dark, sticky liquid from patches of bark on infected trees' stems or branches.   If the canker spreads around the trunk, it will cut off the food supply (the phloem is destroyed) and the tree will die.  The tree will then have to be felled, though this partly depends on where it is. No direct treatment for the disease is available, though an injection of allicin (derived from garlic) is said to be effective but costly. Younger trees (10-30 years old) are at greater risk and can succumb to the disease in just a few years.

Further information about threats to the horse chestnut can be found at the links below: