cankerBack in 2006, the Woodlands blog commented on the problems facing horse chestnuts, namely disease ( leaf miner moths, leaf blotch fungus, bleeding canker) and drought. The last of these may have disappeared for the time being as we have just experienced one of the wettest Augusts on record, however bleeding canker and the leaf miner continue to be problematical and are spreading. 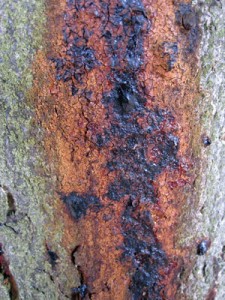 The Forestry Commission has recently surveyed many hundreds of horse chestnut trees (in towns and in the country) and found that almost half of them showed symptoms of the disease bleeding canker  with trees in the south-east being affected more often than others. Detailed information and advice on bleeding canker can be found on their website. Wherever there is dieback of branches in the canopy, then trees must be checked by a qualified arboriculturist so that appropriate management can be undertaken.

Maps of the distribution of the leaf miner (between 2003 and 2007) show that it has spread extensively since it was first reported in Wimbledon in 2002.  It is spreading at a rate of some 40-60 km per year. Whilst the adult moths can fly, it is thought that cars and other vehicles assist their dispersal and may also spread infected leaf material. 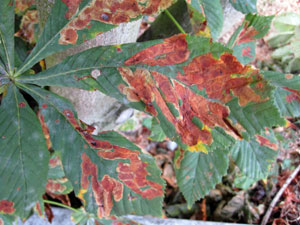 The leaves of trees infected by this moth turn brown and by late August to September many fall prematurely from the tree. The Forestry Commission website says that this damage is primarily an aesthetic problem, and there is no evidence that infestation, on its own, causes dieback or a decline in tree health, or tree death. The Forestry Commission offers a number of suggestions about managing the leaf miner problem, mainly through the disposal & composting of infected leaves. If leaves are removed then so are the over-wintering moth pupae, which would otherwise form the first generation of moths to attack the tree in the spring.

The Commission continues to monitor the spread of this moth, and is keen to receive information and records of infected trees in areas not included on the 2006 map. Further information on the horse chestnut leaf miner can be found in the Exotic Pest Alert.

We have many horse chestnut trees where I live in Wiltshire with leaf miner moth.

We have removed many a diseased chestnut.

I’ve got a 2 year old chestnut from its state as a nut in a pot, it has grown well but had shown signs of white fly and I’d sprayed for that. However it’s still showing signs of leaf curling, without signs of any culprit. Advice on this and any cure would be appreciated. Thanks.

Do you mean Canker ??
The blog speaks about canker, as does the BBC article.
“Horse chestnut leaf damage ‘not linked’ to canker risk“

Is funny to see that it was even associated with cancer?!!

Thankfully there now saying it does not..

I have been very alarmed to see my well nurtured horsechestnuts obviously damaged by ? the dreaded moth. I live in North Uist in the Outer Hebrides and had hoped we might be too isolated for this to happen.
What should I do? Over the last 40+ years my husband and I have fought to introduce trees to this island.

We have a horsechestnut tree which until 2 years ago was healthy with many conkers, it now has very few leaves on it, those that remain are brown and withered. Like many we advised our council but they didn’t want to know even though it hangs over our busy village road. We have paid to have some branches removed which hung over the road and even hired a solicitor who advised the tree is not on our land but on the boundary, they still haven’t resolved the legal liability should it fall down! We live in South Devon and I notice several horsechestnuts in local play area have the same problem. I keep checking the website on this infestation to see if anything can be done but it appears there is stalemate on this issue!

Bartlett have released a new research paper on bleeding canker. You can read it here: http://www.bartletttree.co.uk/tree-expert-news-details.cfm?id=65.

The research, sadly, focused on treating the tree once infected, and not the disease itself.

We live in hope!

Issues with Horse Chestnut are of prominent concern to the arboricultural industry. The only advice which is safe to say is that instigating a tree survey tree survey by a suitably qualified arboricultural consultant will enable a strategy for individual homeowners. As for a wider solution, breakthroughs in various forms of research are making their way into the industry regularly.

Hi, We have several protected trees in our garden 2 of which are horse chestnut trees. One of these trees has had to be felled due to bleeding canker. The other tree is showing signs of both bleeding canker and leaf minor. I have applied to the local authority about felling this tree so as to protect the rest of the horse chestnut trees in the area which are in very close proximity. Whilst they have allowed me to fell the largest tree, they have declined to allow the younger tree to be felled. It is so apparent to anyone with any common sense that this tree is putting several others at risk, not to mention the danger of it falling onto my neighbour’s property and demolishing her house. I am very concerned about this matter but fail to see what I can do. I cannot afford to pay for an expert’s opinion and I thought that the local authorities were the experts but do not seem concerned about this disease spreading. HAS ANYONE ANY SUGGESTIONS?

hi iwork at a care home in doncaster as gardiner handyman,our home has lovely grounds, with very old chestnut trees 4 0ff, they have beeninfected vrey badly we have lost all the conkers already this year, and the bark is bracking off as well, yesterday had alarge branch brake off,around 25inch round and20ft long.these trees i think are listed trees thay have number on? can you help at all, as i think we are going to lose these very old trees, our grounds are part off oliver cromwell land,

There is lots of information and advice on the Forestry Commission website.
The following quote is taken directly from their website :
“Monitoring and research on horse chestnut leaf miner (Cameraria ohridella)
Help us to monitor the spread of Cameraria ohridella
The spread of C. ohridella is being monitored by collating records received from a wide range of institutions, research organisations and individuals. We are very keen to receive records of C. ohridella in Great Britain and Ireland from any areas not already indicated on our 2006 distribution map.”
There is more detail and information at http://www.forestry.gov.uk/fr/INFD-6YSKJF
The following page http://www.forestry.gov.uk/website/forestresearch.nsf/ByUnique/INFD-6YUBY5 gives maps showing the spread of the moth over these last few years.

we have two horse chestnut trees outside our work premises which are both infected with this bug, we ripped open one of the leaves to find it wiggling around inside wich is at the moment providing blue tits with a food source.
we are in northfleet (dall) and just writing to let you know of this activity as we dont know if we are on the map records that you know about?!

Hi, I am the Co-ordinator of the Friends of Withdean Park Brighton East Sussex. I found this site looking for info on Coppicing. Withdean Park has a woodland bordering a park and which is home to a National Lilac Collection. Our Horse Chestnuts have this disease with burnt looking leaves, which our Ranger knows about. We help to manage our woodland which was decimated by the 1987 storm. Just for your info about Elms, Brighton is an Elm conservation area and has 2 of the oldest elms in the UK in Preston Park off the London Rd as you enter Brighton. Well worth a visit. Our woodland also has many young elms growing too.

The BBC program ‘The Material world’ [and its podcast] has some interest material on Horse Chestnut problems this week (23rd Oct) –
quote “While other tree species are even now holding on to their remaining leaves, horse chestnut trees are being besieged by an invasive pest – a caterpillar called the Horse Chestnut Leaf Miner. Will the horse chestnut follow the doomed fate of the Dutch elm?”
see http://www.bbc.co.uk/radio4/science/thematerialworld.shtml

In our area, (West Norfolk, Thetford Forest) I have yet to see a Horse Chestnut that is not badly affected. It looks like we are going to loose pretty much all of them.

There seems to be a great deal written about how many horse chestnut trees are now infected with both the moth infection and the canker that is killing them. There also seems to be much said on how year by year they are spreading across the country, but I cannot find anything about what is being done to stop the terrible loss of these beautiful trees.
Surely there is something that can be done, especially for the moth infestation? Could they not spray trees just after the eggs are laid to kill these moths.
After the loss of the Elm tree (are there any left in England?) I would have thought we would be moving mountains to try and save these trees.
Then there is the oak = they would be even more terrible to loose.
I also noticed this year that my huge pear tree has some strange moth infestation on its leaves which shows as a bright red spot on one side of the leaf with eggs on the other.
What is that and what is being done nationaly to stop this massive tree loss?

We have missed an Oak disease seminar, but there is an article here about it with a couple of photos

Dear Steve
I have not read much about Sudden Oak Death, but there seems to be an informative article on the Forestry Commission web site:-
http://www.forestry.gov.uk/forestry/WCAS-4Z5JLL
Hopefully, someone more knowledgeable will post about it.
Regards
Chris

I have just been searching the Internet to see what has been published about the prolific outbreak of some form of disease amongst the Horse Chestnut trees in England. I noticed during the summer this year that a large number (I would put it nearer 50%, perhaps more) of trees have been affected. It gives the appearance of “scorching” – as if the tree has been damaged by the heat from a bonfire or similar with the leaves browned and shrivelled. I have seen this from the South Coast right up to Norfolk – as far as Kings Lynn. Does anyone know which of the three identified diseases(bleeding canker, leaf miner moth or the bacterial infection) has caused so much evident damage this year in particular

Dear Chris,
although this is a slight tangent to your posting about horse chestnuts, I was wondering about “Oak Sudden Death” disease? Do you have any sense of how serious this is in the UK and what species it affects?
Thanks and best wishes,
Steve Rollnick