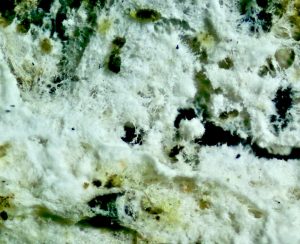 In the last post [see related posts to the side], I broadly introduced the Elder Whitewash as an example of a resupinate crust fungus that is typically found growing on elder.    At first glance, this particular species might not seem the most obvious candidate from these regular Monthly Mushroom posts to be split into a one-off two-part focus, save for the fact that is so regularly seen yet little remarked upon.

No doubt we’ve all seen it and probably passed it by. Hugill and Lucas in The Resupinates of Hampshire (2019 edition)  describe it as “surface rough, waxy when fresh, somewhat fissured when dry. Pure white to greyish white. Very common.” Michael Jordan in The Encyclopedia of Fungi of Britain and Europe writes of its “white, chalky fruiting body tightly attached to substrate, looking like matt emulsion paint or distemper… resupinate with irregular margin, the hymenial (upper) surface having a chalky consistency.” Gerrit Keizer in The Complete Encyclopedia of Mushrooms uses another Latin name, Rogersella sambuci, and describes it as “thin, crust-like, like a streak of paint, several square decimetres, Upper surface slightly warty, matt, white to light cream”, and Roger Phillips in Mushrooms and other Fungi of Great Britain and Europe writes “resupinate, very thin, mealy, pruinose or chalky, white.”

None of this is particularly beguiling or distinctive, unless you take that next step into mycological madness and get some powerful magnifying lenses involved. Now, I appreciate we are getting into pretty esoteric realms here and not everyone has an expensive microscope to hand, so I shall try to hold back to some extent and refer potentially interested parties to these brilliant web resources on MushroomExpert.com . 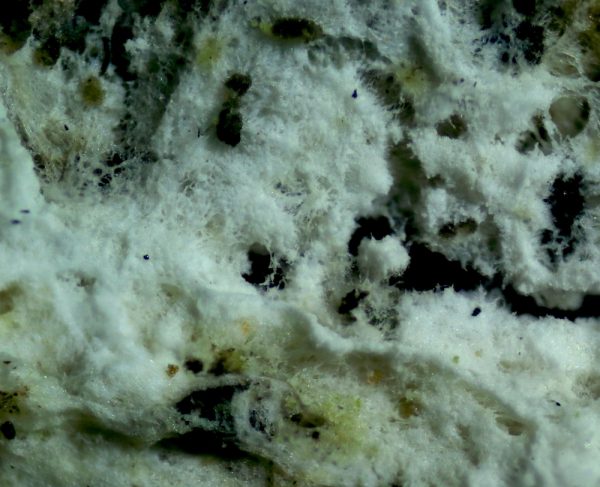 Surface of Elder Whitewash photographed through a microscope at x40 magnification

But in summary, if you use a hand lens or magnifying glass, you’ll be able to see exactly the same kind of details as in this photograph of the visible hymenial surface of the Elder Whitewash here. Basically, as you can see, it just looks like a thick mat of mycelium, with the glimmer of fine crystals embedded within it accounting for the chalky/mealy/pruinose/matt adjectives applied in the various guidebook entries listed above.

Who knows by what process or for what purpose these crystals are produced. I’ve scoured through as much of the admittedly scant literature available on this fungi, and the best reason I’ve found is that they help keep the fungi cool and moisture from escaping from this exposed fruiting surface. These kind of resupinates are found, as mentioned, throughout the year, but also crucially, throughout the world, and they also tend to grow on higher and more exposed branches, so this defence against drying out makes sense.

Still, you’ll need to zero in a lot closer for a more positive identification, for which you’ll need a microscope – not one of those £20 kids ones, but something costing a couple of hundred pounds.  If this is the case, the first place to look, as ever, will be the spores, collected by cutting a surface slither from the branch and laying it face down on a microscope slide for a few hours before putting it under the lens. The diversity of size, shape and ornamentation of fungi spores itself is a thing of wonder. The photo here, taken at x1000 magnification, shows typical Elder Whitewash spores, a relatively tiny (even by fungal spore standards) 4-6.5 X 3.5-4 microns in size (a micron is 0.001mm), ellipsoid in shape, smooth, thin-walled and translucent with a distinctive ‘oil drop’ in the middle. 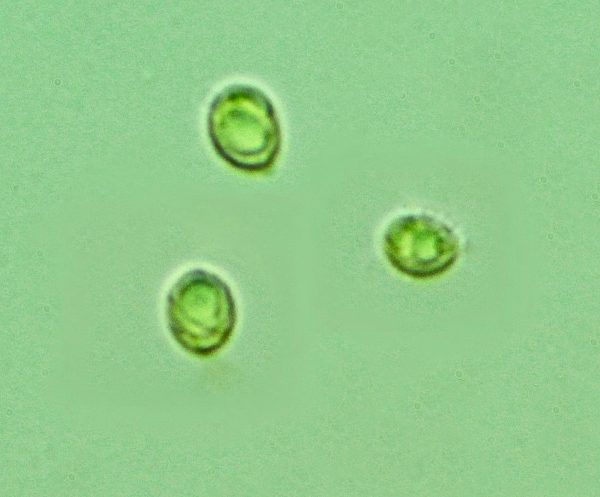 Going further in, the next thing to do is to take a Rizla-thin cross-section and place it under a cover slide to look at its hyphae in more minute detail. This is REALLY fiddly – at x1000, there is a tiny depth of field, so your sample has to be extremely thin to get it in focus.

There are a vast amount of details to look at when looking at resupinates or corticioid samples under a microscope and extremely difficult to sort  out what is relevant and what is not from the jumble. However, the first thing to note here is that the individual hyphae cells are joined together by dramatic clamps that look like comic-book sketches of funny-bone joints.

The hyphal structure of other resupinates don’t necessarily have these dramatic clamps, although many do. Anyway, this is another checkpoint from the descriptive keys listed in the Resupinates of Hampshire: the Elder Whitewash hyphal system is “with clamps, richly branched, often with many crystals in the texture, 3-4(5) microns diameter.” (See also this useful related online resource [http://www.hampshirefungi.org.uk/tombio/resupinates.php]). 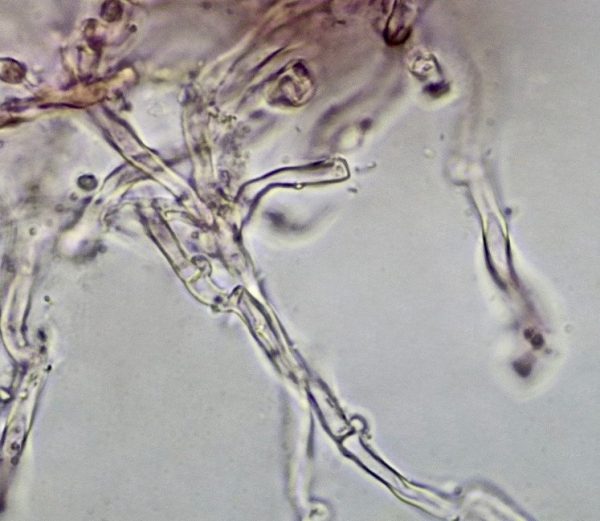 And finally, there are two further structure we should factor in when looking at Elder Whitewash under the microscope. These are the basidia, the club-shaped (clavate) structures growing out of the hyphae on which the spores are borne, and the cystidia, which are large sterile cells found growing amongst the basidia. The cystidia appear to serve no apparent purpose other than making it a lot easier to identify the species in question through their size, shape or whatever.

I have to confess, I struggled to get a clear image of the basidia in my specimen under the microscope here, but the cystidia do seem to fit the descriptions in Hugill and Lucas, as translucent, terminating in rounded or tapering ends resembling hyphal ends , 20-50 X 3-5 microns and “often with apical resinous encrustation and attached large crystals.” 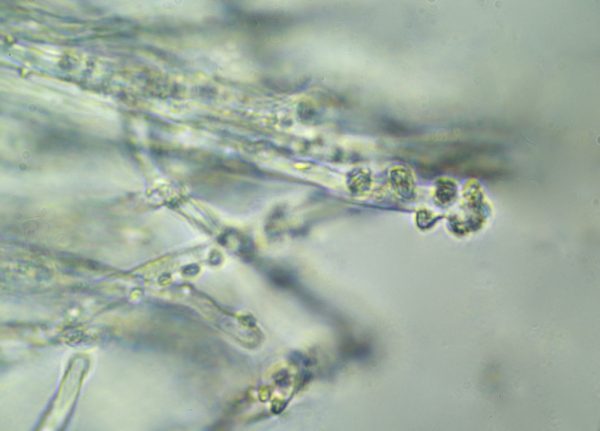 Cystidia - The crystals encrusting the cystidia are easy to detect in this picture.

I’ve gone into far more detail than entirely necessary here, mainly to give an idea of the process involved if you really want to get into the nitty gritty of resupinates, although not necessarily with any expectation that the reader might wish to go down this path themselves. Basically there is a lot more to resupinate fungi than meets the eye, and there also exists a body of knowledge that has been compiled over the centuries by a few solitary obsessives peering down microscopes for hours.

Which just leaves a few final points to ponder upon. First is that Elder Whitewash is not completely restricted to elder. The range of hosts is greater the further south one travels, and the fact that Elder Whitewash, among other fungi, has been recorded on a widening range of trees within the United Kingdom in recent years, has been attributed by some as the possible outcome of climate change.

Secondly, a number of new species have been recently described across different parts of the world, which to all intents and purposes are pretty much identical to Elder Whitewash, except for differences in host trees and obscure details such as tiny variations in the size and shape of the spores, hyphae and cystidia that can only be measured under a microscope. In fact, Hyphodontia sambuci is considered to be a “species complex”, so the differences between many of these new species are so small it is really difficult even for scientists to draw the boundaries. 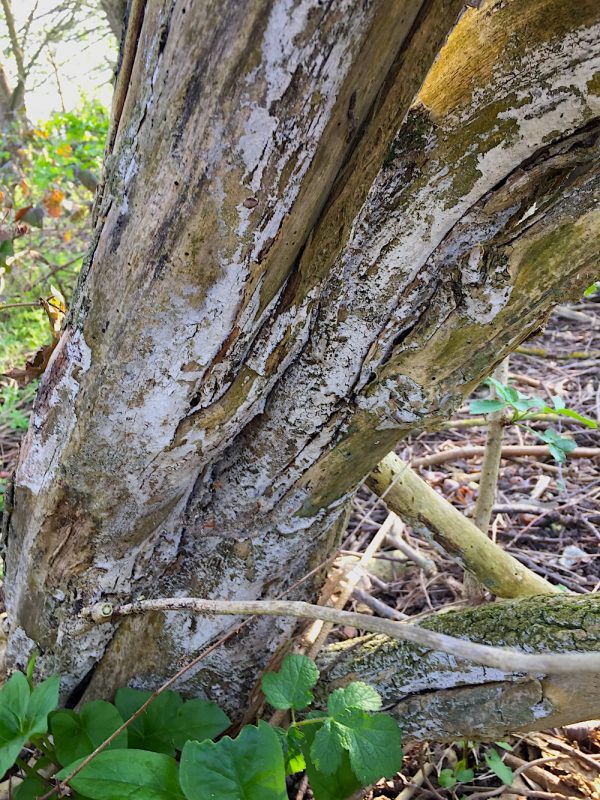 For us mere mortals, as Henrici himself points out in his ‘An Introduction to Corticioid Fungi’ article mentioned in the previous part, “If it’s chalk-white and round the base of an elder and it is not in fact white paint, then it will be Hyphodontia sambuci, which also occurs less abundantly and conspicuously on a wide range of other hosts.”

Finally, and perhaps most importantly, Hyphodontia sambuci and its close relations and variants are harmless to their hosts. These are white-rot fungi that decay the lignin in the wood to leave the cellulose for other organisms to move in and feed on and biodegrade, but whether on elder or other hosts, they only do so on fallen branches or bark or, if on the tree itself, only on the dead parts. 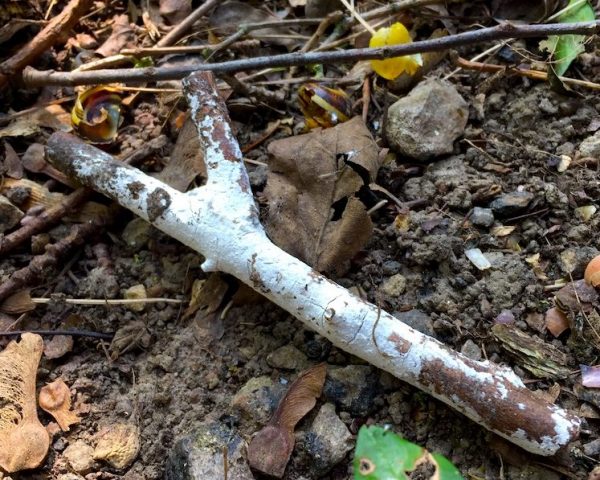 So if you see these characteristic thin chalky overlays, have no fear. The tree is not diseased. These fungi are basically doing the job of cleaning up the dead wood, breaking it up into its natural constituents for use in the next phase of the carbon cycle.