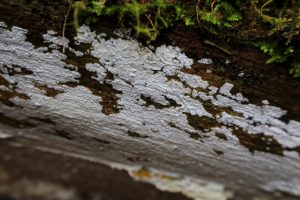 They are among the first of our trees to burst into leaf, and any moment now they should be yielding up their perfumed blossoms for cordials, champagnes, fritters or whatever your fancy is. There are those, however, who believe our native Black Elder, Sambucus nigra, to be something of a mixed blessing, best confined to the hedgerow rather than the woodlands. Fast growing, spindly and brittle branched, they spring up in unsightly shrub-like tangles in those nitrogen-loaded hotspots left uncolonised by more majestic species. The featured image is the Elder Whitewash - a crust fungus regularly found on elder .

As John Lewis-Stempel poetically writes in The Wood: The Life and Times of Cockshutt Wood (2018),“Poor elder. Its youth is green and too brief; there is no adolescence, no pert twenties, MILF/DILF thirties – it goes straight to wrinkly, twisted-bone, deep old age, and loiters about, unloved, for decades, losing its bark in an arboreal psoriasis. The elder is a miserable tree… a bush posing as a tree, a tree failing to be a bush.”

Bees and other pollinators might buzz around their seductively scented umbels, and the birds flock towards their late-Summer clusters of gleaming black berries, but our ancestors didn’t conjure up such sinister appellations as Devil’s Tree or Witch’s Tree without good reason: the wood, roots, shoots and leaves are laden with compounds that are metabolised into cyanide if ingested or inhaled.

The name elder is believed to stem from the ancient Anglo-Saxon ‘aeld’ for fire, due to the old practice of blowing through its hollow stems to kindle a flame, although it was shunned as firewood for the obvious reason of its toxicity. Roy Vickery reveals in his Garlands, Conkers and Mother-die: British and Irish Plant-Lore (2010) that even right into the middle of the last century, there were those who claimed “if you burn elder wood you will become bewitched”, citing a couplet from an ancient folk rhyme, “Make a fire of elder tree, death within your house shall be.”

That said, it has also enjoyed more positive folkloric associations. Its dried flowers were traditionally used to ward off evil spirits and deter flies. There are many who still espouse the use of other parts in traditional medicine too, although there seems to be some dissent as whether its berries, which have proven medicinal abilities in fending off colds and flu viruses, are mildly poisonous if uncooked or whether it’s just the seeds. If you are interested in its culinary or medicinal uses, there are plenty of resources online, but perhaps best start with the Woodland Trust’s entry in its ‘A-Z of UK native trees’ 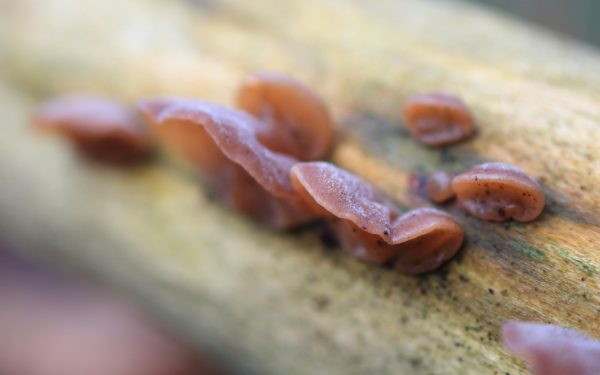 The Jelly Ear fungus is the best-known associate with the elder.

I have already looked at the religious, mythological and medicinal aspects of another of the fruits of this so-called ‘Judas tree’, which grow within and upon it but are not actually a part of the tree itself: Jelly Ear fungi  This strong association between Jelly Ears and elder provides a strong clue to the identification of both fungus and tree in the absence of stronger evidence. That the Jelly Ear is also one of the most commonplace and reliable of UK edibles also suggests its role in breaking down the toxic compounds found within the wood.

There is another fungal associate with the elder that is just as ubiquitous but neither as conspicuous nor as apparently useful: the Elder Whitewash. 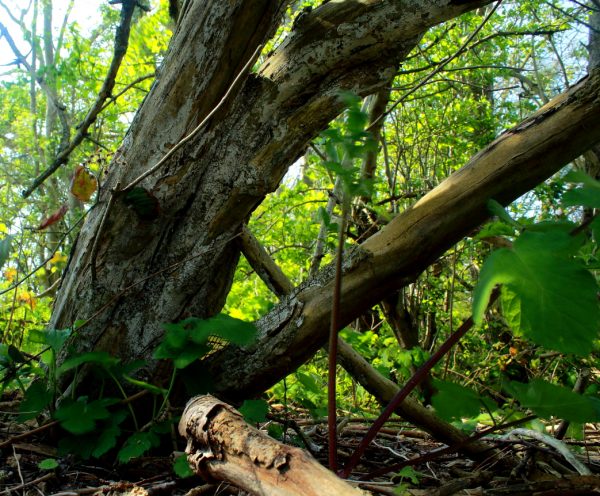 I promised (threatened!) I’d return to resupinates in my January post on the Hairy Curtain Crust, and in the absence of much else in the way of mycological activity out there this month, it seems a good time to come back to the subject. After all, Elder Whitewash appears throughout the whole year, although it has to be said, like the elder itself, these unsightly white smears that appear like stains across the tree’s furrowed bark don’t tend to attract much in the way of love or attention from nature lovers.

Putting the Hairy Curtain Crust alongside the Elder Whitewash demonstrates just what a broad catch-all category resupinate fungi comprise. In summary, resupinates are patch or crust fungi that release their spores from an outward-facing surface area. Often the whole of their visible structure is essentially this fruiting surface. However, the similar physical forms do not necessarily indicate any strong family relationships between many of the species categorised as resupinate. There are quite a few, of which Hairy Curtain Crust is a prime example, that can morph into brackets, depending on the angle of the tree or branch they emerge from, and as such can also be described as bracket fungi. 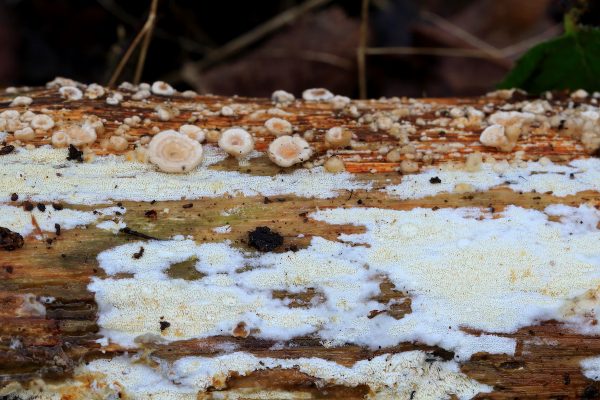 The Hairy Curtain Crust, one of the easiest recognised resupinate fungi, growing alongside Split Porecrust, a markedly different appearing resupinate.

Resupinates can also be characterised as poroid or non-poroid. Poroid means it might release its spores from the pitted areas of its crust-like surface, just like the more traditionally mushroom-shaped cep or boletus has pores on the underside of the cap instead of gills. These pores might be a range of sizes and arranged in a variety patterns, from more straightforward rows of tiny holes to more complex maze-like arrangements, although you do need to look pretty closely to get an appreciation of their differences.

As an example of a poroid, this photo is a closeup of a fairly common find in the United Kingdom, the Split Porecrust, or a Schizopora paradox. 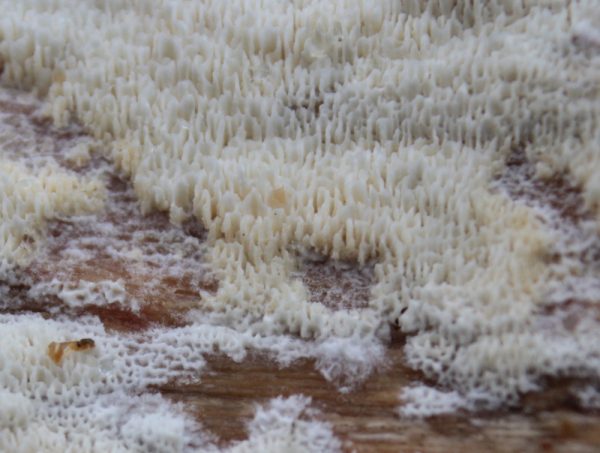 The surface of a Split Porecrust or Schizopora paradoxa in close up detail.

Then there are the non-poroid forms of resupinate fungi known as corticioids. Basically corticoids are categorised by having smooth fruiting-body surfaces. Elder Whitewash and Hairy Curtain Crusts are both examples of these, but corticioid is a descriptive category rather than a taxonomic one. Even those species with much stronger family resemblance may well exist along very different branches of the mushroom family tree, and aren’t even as closely related as, say, a hyrax and an elephant are in the animal kingdom.

There are hundreds of corticioids and unfortunately most look more Elder Whitewash than Hairy Curtain Crusts. That is to say, they don’t show much in the way of obvious distinguishing features. In an old article entitled ‘An Introduction to Corticioid Fungi’ for the January 2000 issue of Field Mycology magazine (it can be partially accessed online), the author Alick Henrici makes the obvious point that “‘Corticiology’ is always likely to remain a minority interest even within the minority interest that is mycology.” The main reason for this is that to tell a lot of resupinate species apart, you will need a microscope.

As he  goes on to point out, going on visual evidence alone, “Any demarcation line will be arbitrary and the question of where to draw it is not one of importance. If the limits of corticioids are vague, so too are the relationships between them.”

The other related problem is that not only do most not have common English names, but even if you go through the trouble of learning the Latin ones, they keep getting recategorized and rename.

So, let’s take a closer look at Elder Whitewash, Hyphodontia sambuci. The first part of the ‘official’ binomial name as listed on the British Mycological Society website comes from the same Greek work ‘hyphé’ (tissue or spider web), which the word hyphae for the filamentous cells that make up the fungi mycelium derives from, and dontia, for teeth, to situate it in a genus of flat crusts fungi with tiny toothlike protuberances rising from the surfaces – protuberances often considerably more obvious than in the case of this particular species.

The sambuci part refers to its elder substrate (Sambucus nigra; Sambuca itself is Greek for pan-pipes, which the thin hollow branches of the tree were thought to be used for). However, Paul Hugill and Alan Lucas’ book The Resupinates of Hampshire (2019 edition) [https://www.nhbs.com/the-resupinates-of-hampshire-book] also list the scientific names Hyphoderma sambuci (tissue/web + skin) and Lyomyces sambuci, which appears now to be the favoured name in many scientific papers. 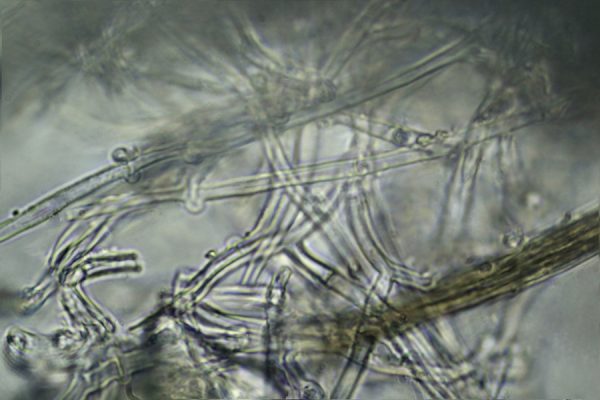 The mycelium of the Elder Whitewash under the microscope, x1000 magnification. A hyphal network showing clamped septa

As I’ve mentioned before, it is wrong to think of a fungi’s mycelial network of hyphae as comparable to the root system of a plant. It is the fungi, and the mushrooms caps or other periodically emerging visible manifestations from whatever substrate it is growing on or within are the fruiting bodies, the reproductive organs.

In terms of its immediately visible features, Elder Whitewash consists of essentially little more than this mycelium forming an extremely thin web-like mat on the surface of the elder branch. It is not basically not that different from the invisible part of the mycelium growing within the wood substrate itself, save for a few features which you’ll ultimately need a microscope to appreciate.

We should point out at this point that the Wikipedia entry for Hyphodontia sambuci describes it as a ‘fungal pathogen on deadwood, especially elder’. We might call into question how something might be described as ‘pathogenic’ – i.e. causing disease – on a host that is already dead.

Let’s just say now that Elder Whitewash is not harmful to living elders or whatever other host you might find it upon, but works on decaying the already dead or dying parts, be it bark or branches.

There is precious little about Elder Whitewash elsewhere online, so with the aim of getting as much information down as possible without overwhelming potentially interested parties, I’ve decided on this particular occasions to split this particular Monthly Mushroom post into two parts.

In the next part, we shall probe the microscopic depths of the Elder Whitewash….      To be continued 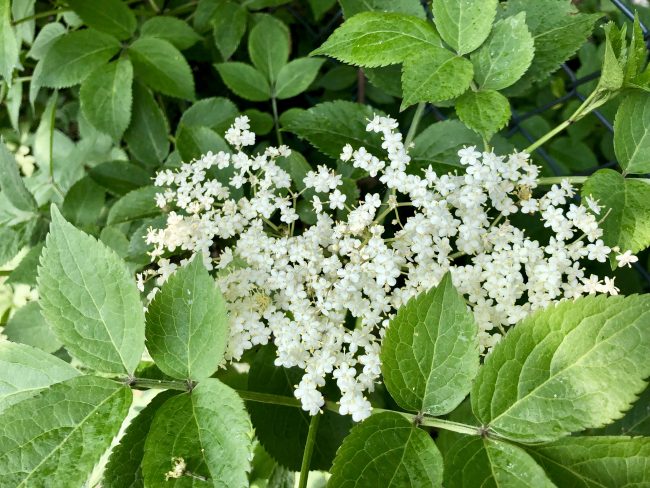