Recycling in a wood? 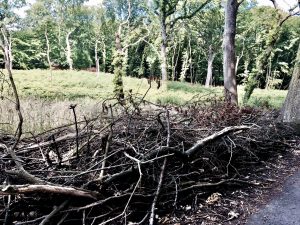 It may be that a dead hedge is just that, your once carefully manicured box hedge which has now been ravished by the box moth.  However, in terms of managing your woodland, a dead hedge may have a different meaning. Here, a dead hedge may be a barrier to an area of new planting, it may be a way to ‘persuade’ people to keep to a footpath, or keep away from a pond / stream.

The dead hedge will be made from the bits and pieces that have be culled in clearing and thinning operations within the wood, material that foresters sometimes refer to as ‘lop and top’ and tree surgeons call ‘arisings. It can also include material cut from brambles and climbers such as ivy, honeysuckle and Old Man’s Beard (Clematis).

Using natural materials to create barriers (and indeed) a habitat in a woodland is a way of using ‘waste’ in an ecologically sound way.  It saves having to remove trimmings from the site and offers opportunities to ‘top up’ the hedge if desired.  Obviously diseased materials should not be used.

Creating a dead hedge from clippings and trimmings is a way of using natural materials, rather than plastic & other materials that do not readily decompose.  A dead hedge will be an effective barrier for a period of time but it will break down sooner or later as bacteria and fungi break down the woody remains (lignin and cellulose).  The disappearance of the hedge will take time as the branches twigs etc are largely off the ground, so relatively dry and decomposition is facilitated by warmth and wetness. 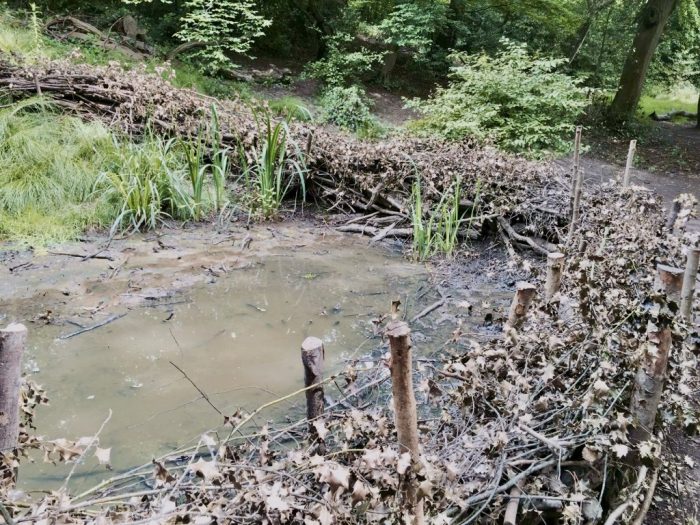 After its initial ‘construction’, the hedge will become part of the woodland, it will be colonised by some plants and it will offer shelter, nesting sites for birds and small mammals, and a ‘home’ to many different invertebrates, such as woodlice, beetles, even certain species of bumblebees.  As the hedge deteriorates, that is, decomposes, so the soil will gain in humus and fertility as the nutrients from the decaying wood etc are released through the detrital food chains.

Another way of using / recycling bits from pruning, clearing etc is by Hugelkultur.   Hugel beds are basically raised beds with a difference - they are filled with rotting wood and other biomass.  They are packed with organic material, nutrients and air pockets. Such beds can be an effective way of creating a productive area for growing fruits and vegetables in your woodland.  There is a woodlands blog about hugelkultur here.

Large chunks of wood e.g. sawn up tree trunks can be stacked up in small piles and will over time make an excellent home for many invertebrates but especially xylophagous (wood eating) insects, for example,  saproxylic beetles.  These are beetles that live / eat in dead wood.  In the UK, some 600+ beetle species (from 53 different) families are associated with deadwood. Some feed on the deadwood itself (often with the aid of symbiotic bacteria in their gut), others feed on the fungi that are gradually ‘dissolving’ the wood.  Ants and wasps sometimes make their nests in dead wood. 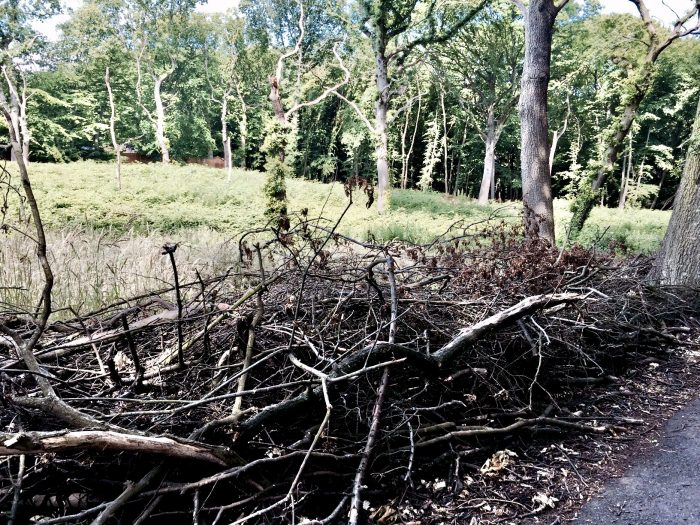 I just discovered the term and concept of hugelkultur a few weeks ago. Having already built loads of dead hedges (primarily fallen birch branches and twigs, plus cut back gorse, I’ve now started a couple of hugels on a trial basis, topping the woody matter with lots of cut bracken plus grass and leaves to come. I’m hoping the property of bracken, which inhibits growth of other plants, won’t overpower everything else – anybody know?