You are here: Home > Blog > A Guide to Wild Flowers of Woodland and Hedgerow > Red Campion 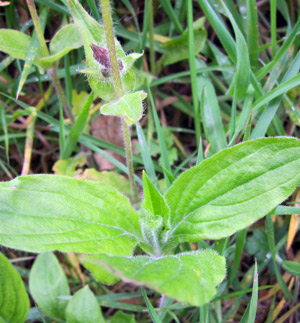 A perennial plant that may reach a height of one metre, but generally smaller.  The stems are often described as 'downy' - due to the presence of many hairs (see image at bottom of page).

Leaves arise from nodes (slightly swollen region of stem) as opposite pairs.  The leaves are not toothed, that is the leaf margin is smooth or entire.  The leaf shape may be described as lanceolate or spear shaped.  The leaves,  like the stem, bear numerous hairs. 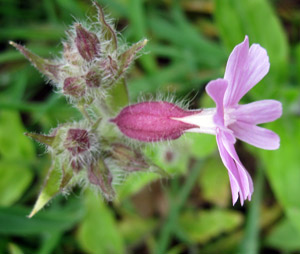 Generally the flowers are a distinctive pink colour (18 - 25 mm across) but there is considerable variation in colour.  A pale pink colour is sometimes an indication that the plant is a hybrid with the White Campion (Silene latifolia).

The petals (4/5) are deeply incised - so it looks as though there are many and surrounded on the outside by the 'teeth' of the sepals (calyx) - which are joined at their base.

The sepals or calyx is also very hairy - see image below. The Campions are dioecious - that is, there are separate male and female plants. 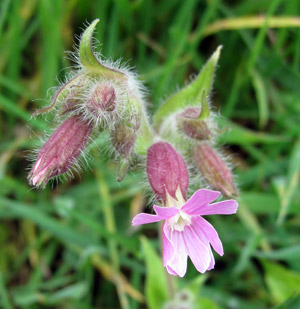 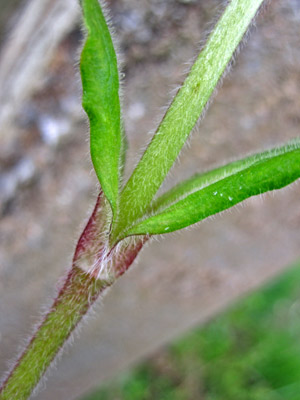 Red Campion or Silene dioca belongs to the 'pinks' family or Caryophyllaceae.  It is a perennial with creeping rhizomes underground stems - which allow it to spread.

It is often found growing in rich soils in light shade in woodlands and hedegrows / hedgebanks.  It is, however, widespread.  It is a perennial plant.