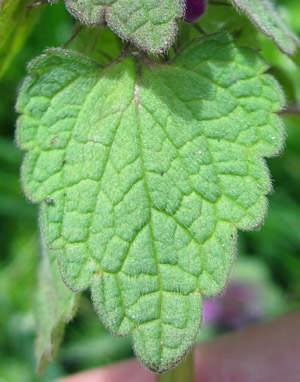 The leaves are somewhat 'soft' to the touch - with many hairs present (see photo at bottom of page).  They have a number of rounded teeth along the leaf margin. The leaves are not dissimilar in shape to those of the common or stinging nettle.  The veins on the leaf are quite pronounced.

The leaves occur in pairs - opposite to each other.  Each successive pair is set at right angles to the previous pair - see image below.

The bracts which surround / subtend the flowers are similar in shape to the leaves. The stem is hairy and square in cross section. 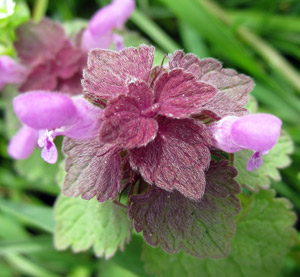 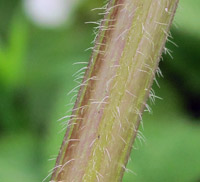 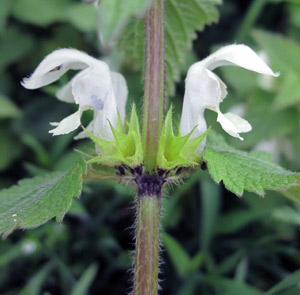 The flowers are formed from petals that have joined / fused together to form a two lipped, open mouthed structure (see adjacent image).

Underneath each flower is a 'toothed' structure formed from five fused sepals.  The flower of white dead nettles is white but may bear some greenish streaks. 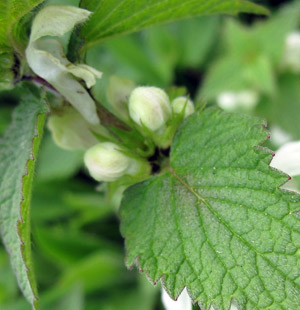 The flowers of red dead nettles vary from pink through to purple. 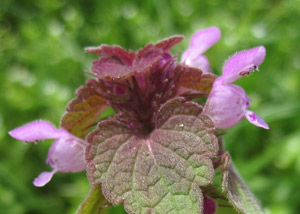 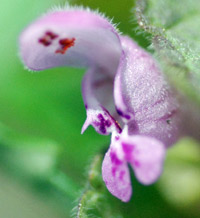 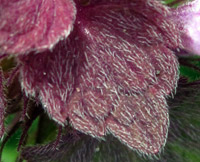 The dead nettles are members of the Lamiaceae or Labiatae.  One feature of these plants is that they have 'square' stems, and their leaves are arranged in pairs opposite to each other. Various labiate plants produce aromatic oils (e.g mints). The flowers occur in the axils of leaf-like bracts. - they are virtually indistinguishable from leaves.