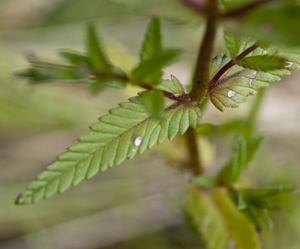 The leaves occur in pairs - on opposite sides of the stem.  They are stalkless, that is, they have no stalk or petiole.

Their overall shape is described as lanceolate - or spear shaped, with noticeable 'teeth' along the leaf margin.

The stem is 'spotted' with brown / purple 'streaks'. 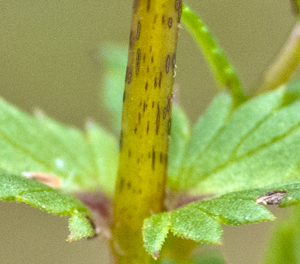 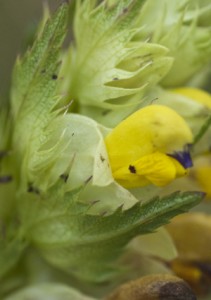 The flowers occur in leafy spikes.

Sepals form a tooth like structure.  The petals form the corolla, which is yellow and two lipped - the upper lip is flattened on both sides and there are two, short violet "teeth".

If and when seeds form, they rattle within the parent structures. 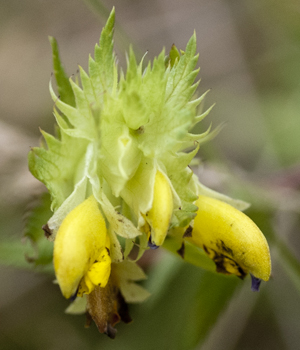 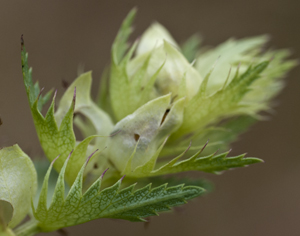 It is a partial parasite in that it gains some of its nutrients from the roots of adjacent plants. This is not a woodland plant but more a plant of  dry fields or meadows. It flowers between between June and September.

Research at the UK's  CEH, Centre for Ecology and Hydrology has shown that encouraging Yellow Rattle to grow in hay meadows increases biodiversity by restricting the growth of grasses, thereby allowing other species to thrive.

Its other name is Hay Rattle - as the rattling of the seeds within the remains of the floral parts is said to indicate that the meadow was ready to be cut for hay.