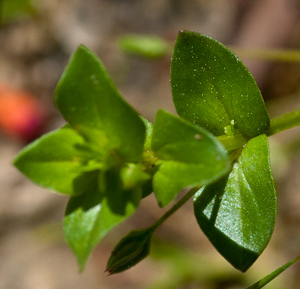 This is an annual plant, whose stems spread and sprawl (some 30 / 40 cm).  The stems are square or angled in cross section.

The leaves arise in pairs, opposite to one another.  They are oval in shape coming to a point at the apex of the leaf.

On the underside of the leaf, black / purple 'spots' may be visible (glands) 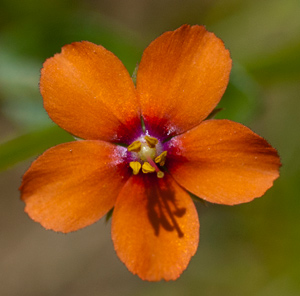 The flowers are a distinctive red or scarlet - hence part of its name.  Though the flowers are usually this colour,  there are variants, for example, var carnea is flesh coloured, and a blue form is sometimes seen on chalk grasslands.

There are 5 bright coloured petals, and five,  thin, narrow, pointed,  green sepals - arranged like a star - set behind the petals.  There are also 5 stamens. The flowers close quickly when the sun goes in. 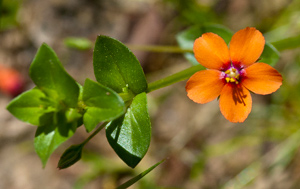 Scarlet pimpernel is common through England and Wales, and coastal regions in Scotland.  It 'likes' lighter and well drained soils, and is a weed of arable land and gardens.  It is generally found in open habitats, paths, walkways and disturbed ground.

According to Wikipedia "Pimper is believed to have stemmed from the French infinitive pimper meaning to dress up elegantly and from the present participle pimpant meaning alluring in dress seductive".  The scarlet pimpernel belongs to the Primrose family.