You are here: Home > Blog > A Guide to Wild Flowers of Woodland and Hedgerow > Yellow archangel 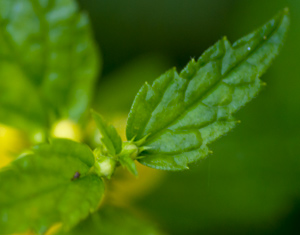 The yellow archangel belongs to the deadnettle / mint family (i.e. The Labiates  or Lamiaceae) and it resembles these in its general shape and form.  The leaves arise in pairs opposite to one another and have marked tooth edges - and the leaf comes to a point at its apex.  The leaves are a deep greeen and have stalks.

The leaves (and flowers) if crushed or bruised give off a characteristic, somewhat acrid smell. 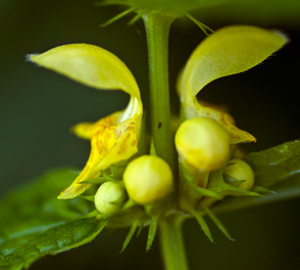 The flowers are sometimes described as 'butter yellow' with red brown markings or honey guides.

When at the bud stage, the flowers are like small, round, yellow bubbles - see adjacent image.
The spots and markings on the lower part of the flower guide bees towards the back of the flower and the nectar.  As they collect the nectar, pollen is deposited on the stigma - leading to fertilisation. 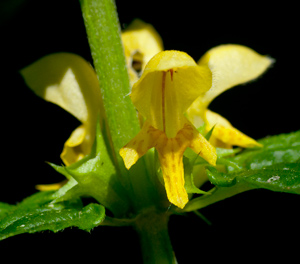 The flowers have two 'lips'. The upper lip is sometimes described as being helmet shaped, and the lower lip carries the markings mentioned above. Each individual flower is said to be shaped like an angel.

The yellow archangel is in flower between April and June. 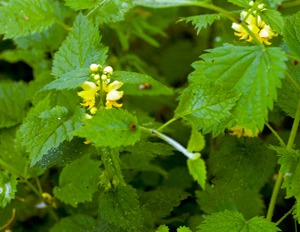 Yellow archangel is to be found in damp woodlands and hedgerows.  It is found throughout England and Wales though perhaps commoner on 'heavy soils'.

It is to be found on the edges of woodlands and tends to spring up after coppicing.  It is regarded as an ancient woodland species - it can spread by seed and its creeping runners. 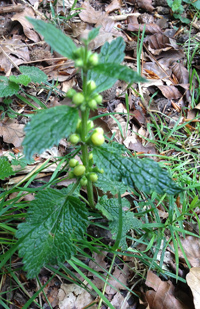