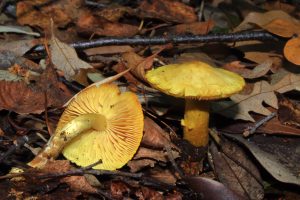 There is something quite exhilarating about the smell of autumn, and I immediately picked up on it on my first evening woodland walk after the Autumn equinox a few weeks back. The earthy richness that hits the nostrils as your feet scuffle through the newly fallen leaves, and the overwhelmingly sharp freshness of the damp air tinged with the lingering perfume of ivy seems to reawaken the senses after the torpor of Summer. Camus put it nicely when he wrote, “Autumn is a second spring when every leaf is a flower.”

Smell is a sense that is often overlooked when it comes to identifying fungi, although any encounter with a stinkhorn, its viscid dark green tip (or gleba) swarming with flies attracted by its ripe miasma, is proof enough of the importance of these chemical signals in the spore dispersal process. 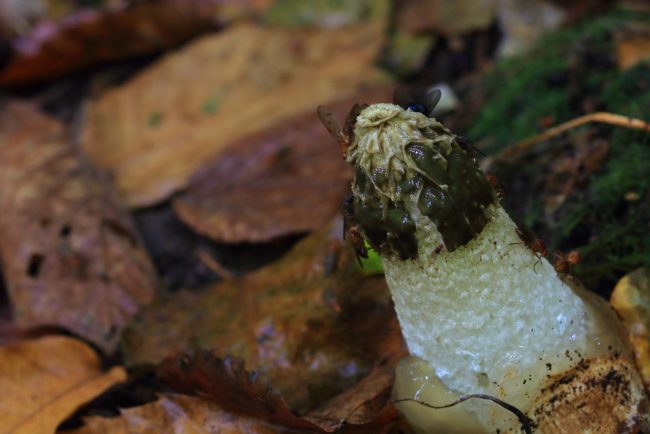 Other species’ fruitbodies have more fragrant aromas associated with them, and it does often pay to take a healthy good sniff when checking your finds against the pages of possible candidates in your field guides. Odour (or aroma, depending on which way you look at it) is often provided as a descriptive field in books such as Geoffrey Kibby’s beautifully illustrated two-volume Mushrooms and Toadstools of Britain & Europe (whose third edition came out this year), and provides a very useful guideline in many instances. 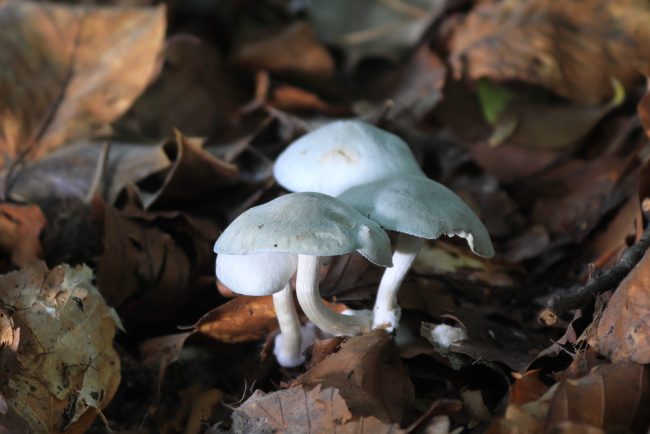 The Aniseed Funnel (Clitocybe odora), for example, might not be quite as funnel-shaped as its name suggests in the early stages of its fruitbodies’ growth and their characteristic blue-green colour, with a yellowing centre to the cap, not quite as developed. Nevertheless, if you do chance upon a group of this common species dotted around in the litter in broadleaf habitats and you have your suspicions, then taking a good whiff of the thin white flesh will probably swing your identification for you.

This tell-tale aniseed scent is due to the presence of two strong-smelling organic compounds in the fruiting bodies, 4-Anisaldehyde and benzaldehyde, the latter used as in synthetic almond flavourings. It wouldn’t be too much of a leap of the imagination to infer then that their smell must serve some evolutionary purpose in attracting squirrels or other creatures to aid in the distribution of their spores. 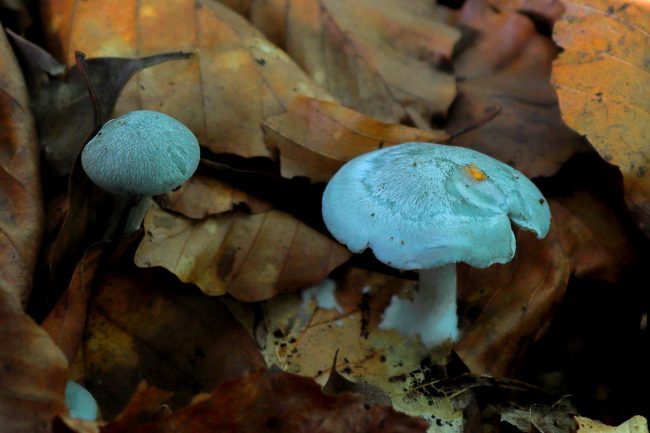 Variable in appearance but consistent in scent, the Aniseed Funnel

In a post from last year, I mentioned that squirrels seem to love harvesting the various types of russulas, or brittlegill mushrooms, that would be considered far too peppery or acrid for human consumption. Russulas are out in force in October, but one is hard-pressed to find pristine specimens. More likely than not, you’ll find them upended with large bite-sized chunks missing, and often left to dry on top of tree stumps, presumably to be eaten later. The smells of the Autumn woodland also coincide with unique sounds of squirrels frantically scuffling around out of eyeshot as they gather in supplies and fatten themselves up for the winter season, so one might assume that such a nutty dimension to the smell of the Aniseed Funnel must play an important part in the squirrels locating them.

Smell in humans seems to have much more a subjective dimension than in squirrels. One of my fellow foragers described the whiff of the Aniseed Funnel as more like Play-Doh, although this too makes kind of sense. Apparently the toy manufacturer Hasbro recently tried to trademark its “unique scent formed through the combination of a sweet, slightly musky, vanilla-like fragrance, with slight overtones of cherry”, and Wikipedia does indeed claim that 4-Anisaldehyde, “being structurally related to vanillin, 4-anisaldehyde is a widely used in the fragrance and flavor industry”. Something to ponder upon, in any case, but Aniseed Funnel is just one of a few more distinctive smelling fungi that might evoke certain individual memories. Another is the Curry Milkcap, which smells less of the curries we know nowadays and more of mothballs. What squirrels make of this is open to question. 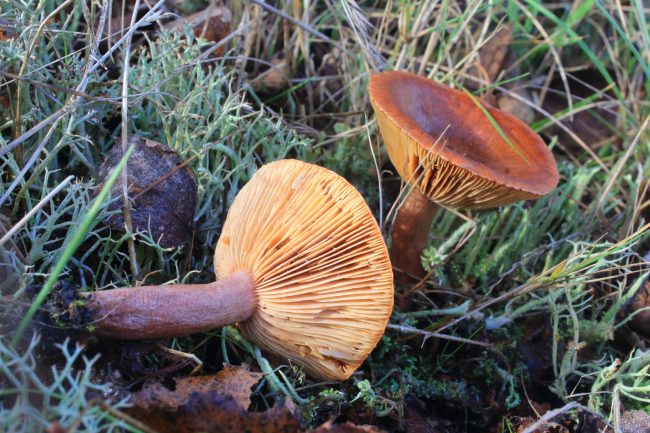 Smell nevertheless plays a useful role in identifying the hundreds of species in the russula group, however, rather than their bright and often very similar cap colours. In last year’s October Fungi Focus, I detailed Ochre Brittlegill (Russula ochroleuca) as one of the most commonly found yellow capped russulas. There are plenty of similarly coloured ones, however, such as the Geranium Brittlegill (Russula fellea).

There are a few physical differences to this one. The stem seems to be a little thicker than the Ochre Brittlegill, and usually thicker at the base. Furthermore, the cap is described by First Nature as “honey yellow but sometimes tawny-buff or orange towards the cap centre” and in The Fungi of Temperate Europe (2019) as “a rather uniform buff to cinnamon-buff colour” while the Ochre Brittlegill is “ochre-yellow” in both sources. As one can see, there is plenty of scope for overlap, however, but in terms of colouration, the main difference is that while the latter has white flesh and whitish gills, the buff colour is also present to a degree on the gills and stem of the Geranium Brittlegill. 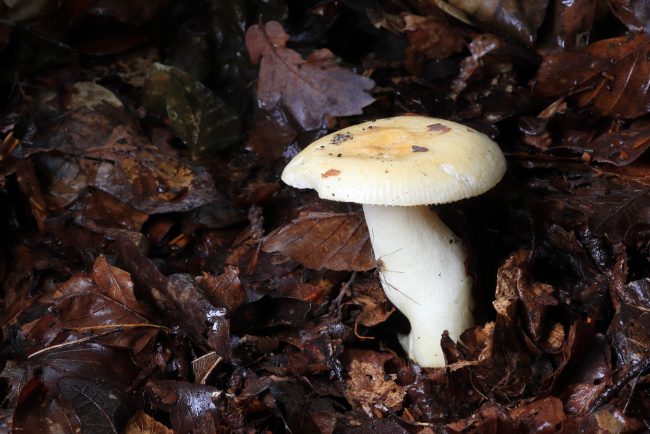 The failsafe way to distinguish them is to sniff the gills. The Geranium Brittlegill, aka the Geranium Scented Russula, as its name suggests, smells of geraniums (well, actually pelargoniums if we want to be more precise!) or, once more highlighting the degree of subjectivity in the olfactory senses, some sources say stewed apples. It is important to bear in mind also that smell is no indication of taste with any fungi. Another alternate common name sometimes applied to Russula fellea is the Bitter Russula, and indeed, one can really consider much of this group inedible.

It is also worth mentioning the other identifying features of russulas. First is that they form symbiotic mycorrhizal relationships with trees, growing on the root system, and are thus found growing from the ground beneath their host tree, rather than on rotting wood. Moreover their distinctive colours are restricted to the cap cuticle, which grows as a skin-like layer on the topside of their caps known as the pileipellis. The flesh itself (trama), like the gills, is white or just off-white. 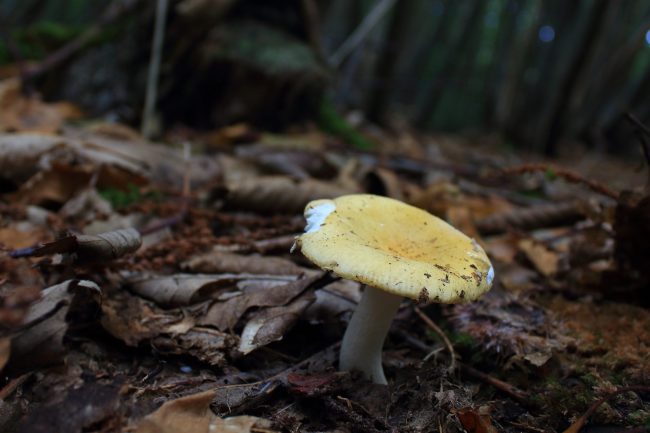 These factors set them apart from seemingly similar species like the Sulphur Tufts (Hypholoma fasciculare) that are sprouting up in large clumps all over the place at the moment, and whose flesh is sulphur yellow and whose gills have a sickly green tinge to them that increases with age. One certainly shouldn’t need to resort to ones nose to recognise a Sulphur Tuft, whose odour First Nature describes as “mushroomy but undistinctive”.

There is one further smallish yellow mushroom however, around the same 3-8cm diameter, bearing the similar name of the Sulphur Knight (Tricholoma sulphureum), whose aroma renders it immediately recognisable. It is another mycorrhizal type found on the ground like the russulas, but its flesh, stem and gills are a uniform colour with its cap, described in The Fungi of Temperate Europe as “warm yellow to greenish yellow”. 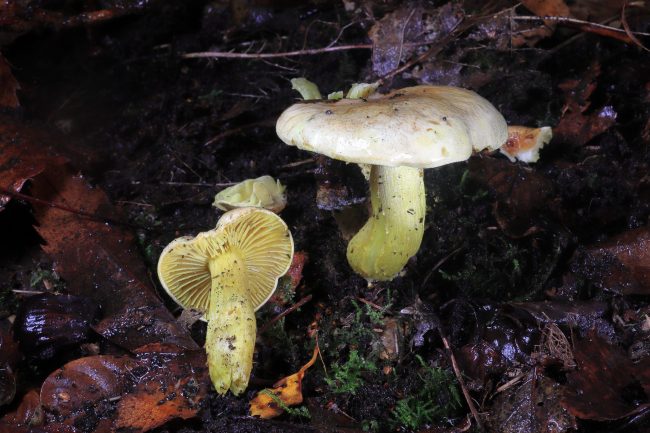 The Sulphur Knight has bright sulphurous yellow gills, flesh, cap and stem as well as a distinctly sulphurous smell.

Like the brittlegills, it leaves a white spore deposit when a print is taken, which is another way of setting it apart from Suphur Tufts, but in the case of the Sulphur Knight, the name was not only coined in reference to its vibrant yellow hues, but due to the eye-watering naphthalene stench that accounts for some of its other common names, the Gasworks Mushroom or the Gas Agaric. The Sulphur Knight truly reeks of burning gas or coal in a way that alone renders it instantly recognisable among any of the aforementioned mushrooms, as well as its closest lookalike, the Yellow Knight (Tricholoma equestre).

These are but a few examples of the various mushrooms one might find around at this time of year that stand out from the crowd due to their smells. We might checklist a few others too, like the soapy smelling Soapy Knight (Tricholoma Saponaceum) or the equally obviously named Stinking Brittlegill (Russula foetens), described by First Nature as possessing “a rancid oily smell that with age becomes more like rotting fish.”   All of these produce a heady cocktail of organic compounds that alone or in combination all contribute to the unique aromas that permeate Autumn. 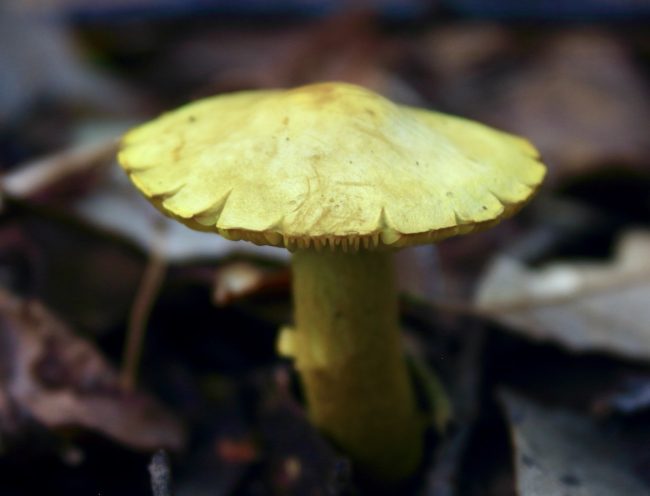 Thanks for the kind words everyone. I love this time of year as there are so many fungi out there to write about. Bryan, I’m in Kent too – just outside of Bromley near Hayes, and there are a lot of Sulphur Knights out and about this year. I’ll keep my eyes out for Tricholoma frondosae, but I did read in Nicholas Money’s book Mushroom that T.equestre is now considered poisonous after a couple of fatal poisoning cases in France. I only really eat things that I know are meant to be good edibles, are fairly common, and impossible to identify incorrectly – so Blewits, Chicken of the Woods, Shaggy Inkcaps, Jelly Ears etc, but i’d definitely draw the line at blushers just in case I got it wrong.

Very nicely written and accurate in detail, Jasper. Can I draw your attention to a rather rare Gas Tricholoma lookalike which occurs in my patch of Kent, Tricholoma frondosae? This is identical to all intents & purposes to both T.sulphureum (apart from the smell!)and T.equestre, but is normally only to be found in Scotland in the UK, associated with birch & aspen rather than pine. Readers may also like to know that this group used to be regarded as good edibles, but are now thought to be poisonous, possibly fatally.

Thanks for publishing this informative article. My personal journey with wild mushroom identification is a slow one but having been out in the woods today, I was able to spot a few new varieties that I can practice with.

To come home to read a post is timely and very useful..and much appreciated…Thanks Jasper